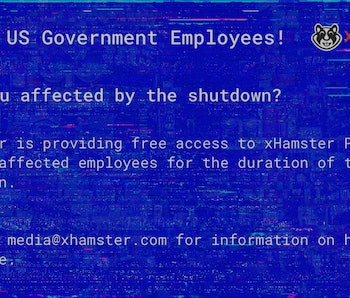 “We know that government employees who have been furloughed are being forced to make hard choices between essentials like rent, food, and transportation,” Hawkins says in a news release, “We don’t want anyone affected to spend money on adult material.”

“We know that people are incredibly wary of disclosing personal information, so if they’d like it’s possible they could even show us the id over Facetime or Skype.” Tweets are also welcome @xhamsterdotcom. “We’re really open to finding a way that works for them and that they’re comfortable with,” Hawkins adds, explaining that in order to keep employee data private “the company will not keep any records, but instead will give a limited-time pass to users.”

This pass will last as long as DC keeps its current shenanigans up. An air of almost insensitive opportunism to the stunt? Perhaps, but we suppose furloughed employees may be in need of a little distraction and stress relief as their paychecks sit in limbo.

On the other hand, if your paycheck is not being held hostage in the name of a delusional border wall, there are lots of other ways you can chip in to fund a government worker’s moment of levity. PayItFurloughed, for example, is crowd-funding beers. So far, PIF’s site says that some 3,000 pints have been donated already, more than a enough for a couple of rounds. Happy Friday.

More like this
Culture
Jan. 28, 2023
These 50 cool things for your home have fanatical Amazon reviews
By Christina X. Wood
Culture
Jan. 22, 2023
Shopping editors are calling these hidden gems on Amazon their most amazing finds of the year
By Cassandra Seale and BDG Commerce
Science
Jan. 17, 2023
Worst-case scenario of Antarctic ice sheet collapse could still be avoided
By Robin Bea
LEARN SOMETHING NEW EVERY DAY.
Related Tags
Share: