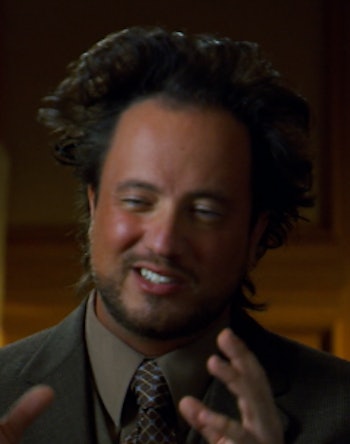 This weekend, thousands of alien theorists and sci-fi fans will descend on Baltimore for AlienCon, a convention built around The History Channel’s runaway hit, Ancient Aliens. After two sold-out California shows (and countless blown minds), the event is heading to the East Coast for three days of non-stop panels, autographs, and extraterrestrial cosplay.

Inverse will be attending AlienCon in person to bring you live coverage from the convention show floor, but ahead of the event we spoke to Ancient Aliens producer and on-camera expert Giorgio A. Tsoukalos (aka the “ALIENS” dude with the crazy hair) about his extraterrestrial obsession, his latest expedition, and why he’s still waiting for Trump to tap him to run the United States Space Force.

This interview has been edited and condensed for clarity. Article continues after this related video.

Inverse: There was a rumor that Trump had asked you to lead his Space Force. If the president actually asked you to work for the government would you do it?

Giorgio A. Tsoukalos: It wasn’t even a rumor at all. If you go to that original article, in giant letters above the title it says satire. Nobody ever read the world satire. It’s unbelievable. He never tapped me for that job, it’s a complete joke. But I’ll tell you this, had he or would he tap me for that job, I would do one hell of a job.

Of course, it’s your civic duty. It doesn’t matter who the president is. If the government asks for your help and you happen to be an expert in that certain field, it is your civic duty to comply.

How do you respond to criticism that these theories demean the accomplishments of ancient civilizations by attributing them to extraterrestrials instead?

"The initial spark of inspiration for was given to us by the extraterrestrials.

We all had teachers. Your first teacher was your parents. Then it was your kindergarten teacher, then elementary school, then high school. All the ancient astronaut theories suggest is that nothing in our past came out of a vacuum. The initial spark of inspiration for was given to us by the extraterrestrials. They were our first teachers, and this is why we are such a magnificent, genius society today. They knew the potential we had, and here we are, the most amazing society that’s ever lived on this planet. And at first, we had a gentle push, we had someone holding our hands like we help our children every day.

There’s no insult in this at all if you look at it from this perspective.

What’s the latest ancient site you visited and what did you learn?

I went to Sardinia and I saw these statues that were uncovered in 1974 and didn’t go on display until last year. They’re called the Giants of Sardinia. If you look at them, they’re really big, like almost eight or nine feet tall. They have this massive torso, short legs, long arms, and then the head looks like C3PO’s head.

"I never said the pyramids were built by aliens.

Also in Sardinia, I learned that there used to be 8000 megalithic structures, and if you put a map of the constellations over them it lines up with stars that cannot be seen with the naked eye. So you have two options: Either they had telescopes, or, and this is my opinion, they had someone telling them, “ok you pile rocks here and there.” These examples exist in ancient times worldwide. So either our ancestors had as advanced a civilization as we have today, or someone told them where to place these structures. And then it was human beings who built this stuff, not aliens. I never said the pyramids were built by aliens.

Where are you traveling next?

In the Spring of 2019, I’m trying to do is go to Nan Madol. That’s an island far away in the South Pacific where there are hundreds of thousands of gigantic bath salt stone blocks. The question is: How were these giant columns transported and put on top of each other. Because each of them weighs between 15 and 25 tons, and it’s no easy feat to transport them in the middle of shark infested water.

What’s your favorite thing about AlienCon?

Meeting and seeing all the smiling faces. It’s such a tremendous place for everyone to come together exchange stories and be among like-minded people. We have panels that are attended by different experts from Ancient Aliens. We normally don’t get to do that stuff. People get to approach and us and take photos. It’s a big celebration of Ancient Aliens and its effect on pop culture. It’s one big party.

What panel are you looking forward to the most?

I’m really looking forward to being the presenter of a panel with Erich von Daniken. It’s the 50-year anniversary of Chariots of the Gods. We did something similar at AlienCon in Pasadena and it was a great success. It’s gonna be me and him on a stage, and I’m gonna ask him questions and the audience can participate.

What’s the importance of Chariots of the Gods?

It’s the book that popularized the ancient astronaut theory. It asked the question of whether or not aliens visited Earth in the remote past. Even though its 50 years old, anyone who is interested in this topic should read Chariots of the Gods as their introduction. It’s still up there was a classic and a defining work. And Erich is the guy who wrote it. He’s now 83 years old and he’s still going strong. He’s actually working on his 42nd manuscript as we speak.

How do you convince someone who refuses to believe in aliens to consider the possibility?

"In my opinion, all the show does is present evidence.

I used to try, a long time ago, to engage with the critics and the naysayer and the hater and the debunkers. But I stopped doing that because it’s a waste of energy. Either you’re open to these ideas or not. After 140 hours of Ancient Aliens, people sometimes still approach me and say, “I really love watching Ancient Aliens, but how come you guys never present any evidence?”

If someone watches and doesn’t think the evidence is valid enough, that is their opinion. In my opinion, all the show does is present evidence for this idea. In the end, it’s up to each individual to accept or entertain the idea or not. We have so many viewers if we have one more of one less it’s ok. I don’t care.

What’s it like to become a meme? Do you feel like you’ve lost control over your own identity?

No, absolutely not. I know who I am and what I’ve said. That is just the society we live in with social media. I’m totally tickled by it, because it’s something that grew organically, and while there are some memes out there that are quite ridiculous, by and large, it embraces that I’m the guy who asks questions and perhaps some of the answers are aliens.

I’m a huge Star Wars fan. So I have to say the original trilogy. Empire Strikes Back is my favorite sci-fi movie. But it’s an almost impossible question to answer because there are multiple awesome sci-fi movies that I love.

What kind of hairspray do you use?

The electric socket. Really, I do have a specific brand but I’m not gonna give them free advertisements.