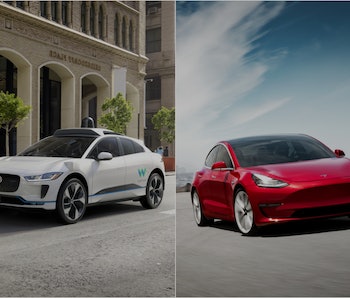 The race is on. Waymo and Tesla are locked in a battle to reach the holy grail of full, level five autonomous driving first. Waymo, which started life as Google’s self-driving car project, has started trials of self-driving taxis in the Phoenix area. Tesla, with hundreds of thousands of electric vehicles already on the road, instead wants to upgrade existing cars with software updates to gradually enable autonomous driving for customers.

The competition intensified this week as Tesla CEO Elon Musk claimed his company will achieve full autonomy in 2019. Musk went as far to tell Recode that “I don’t wanna sound overconfident, but I would be very surprised if any of the car companies exceeded Tesla in self-driving.” Waymo, however, also reached a big milestone this week when it became the first-ever company to receive a license to send its cars onto some California roads without any driver at all.

Here’s how the state of play looks right now:

The former Google autonomous car project dates back around 10 years, and it’s made big strides in that time. Waymo runs a fully autonomous taxi service in the Phoenix metro area. In July, the company said it wanted to focus on expanding into more states, as well as licensing the technology for personal use cars, working to aid public transport solutions, and potential logistics solutions. In the case of the latter, it’s already started experimenting with autonomous trucks.

The project has made impressive progress. In total, the company has completed 10 million miles of autonomous driving on public roads, across 25 American cities of varying terrain. Waymo also runs regular virtual simulations to “train” its system: in the virtual world, the system has driven over seven billion miles, racking up 10 million miles every day.

Waymo’s cars have tacked some sticky situations. In this video, the car avoids another running a red light through an intersection:

There’s still plenty of work to do. Waymo is focusing on making its cars assertive without making them aggressive, the sort of behavior required when changing lanes on a highway. The company is also aiming to make its routes more efficient, as its current system takes the safest route that avoids blocking paths.

Waymo made a breakthrough this week when the California Department of Motor Vehicles issued a license for the firm to operate fully autonomous cars within limits. While Waymo has had a license to test autonomous cars in the state since 2014, alongside 59 other companies including Tesla, the company is the first to receive a license that does not require a human in the driver’s seat. Regulations to allow this new class of license took effect in April this year.

The milestone grants Waymo permission to test around 35 vehicles in the cities of Palo Alto, Mountain View, Los Altos, Los Altos Hills and Sunnyvale, in Santa Clara County. DMV director Jean Shiomoto said that “California has been working toward this milestone for several years, and we will continue to keep the public’s safety in mind as this technology evolves.”

Tesla rolled out the first version of Autopilot back in 2014, powered by a third-party system provided by MobilEye, before switching to its own version two years later. Autopilot drives along highways and other limited situations, checking on the driver to ensure they keep their hands on the wheel. Last month, the company rolled out a “drive on navigation” feature that steers off the highway at the correct turning depending on destination. A future update is expected to allow users to “summon” their car to their location.

Tesla announced in October 2016 the switch to an in-house sensor suite. “Hardware 2,” Musk declared, had eight cameras, ultrasonic sensors, and GPS — enough to one day support full autonomous driving with a software update and a switch to a more powerful internal computer. The following month, the company released a video of that system in action:

In October, the company declared that it’s registered one accident or crash-like event for every 3.34 million Autopilot miles. When Autopilot is off, the frequency jumps to one such event per 1.92 million miles. Unlike Waymo, Tesla does not regularly release official figures on total number of Autopilot miles. One report claims Tesla had completed over 1.2 billion semi-autonomous miles by June 2018 out of a total 7.9 billion miles. In total, the team estimated Tesla has racked up over 1.6 billion “shadow miles,” where the Autopilot system is collecting data but not controlling the car at all. Musk estimated in 2016 that the system will need six billion miles before it can pass regulators.

Unlike many manufacturers, Tesla does not use lidar in its vehicles to measure the distance from objects. Musk said this week that “all creatures on Earth navigate with cameras…there’s no question that image-recognition neural nets and cameras, you can be superhuman at driving with just cameras.”

If ideas like Tesla’s Uber-like autonomous taxi service come to fruition, the company will have a large fleet of self-driving vehicles ready to go from day one.