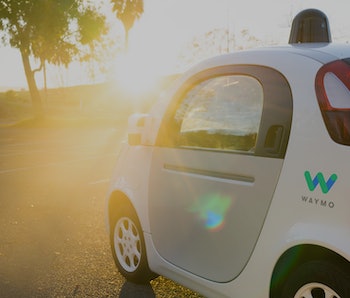 Waymo is quietly transporting people around Phoenix, Arizona, in its autonomous Fiat Chrysler Pacifica minivans, but it has big plans to expand further. In Google parent company Alphabet’s second-quarter earnings call on Monday, the firm suggested its Waymo subsidiary plans to explore big new ventures like deliveries and public transit, areas Uber and Tesla have respectively expressed an interest.

“We remain very excited about the opportunity with Waymo,” said Ruth Porat, chief financial officer for Alphabet. Porat said that the company will continue to develop its Pheonix program, which has publicly ferried around a limited number of consumers since April 2017. The program, Porat explained, is “a first step in building a more fully rolled-out rider program in the future,” with future development focused on “delivering a safe experience.” From here, the team is working on “expanding our testing to more states,” alongside new ventures like “logistics and deliveries,” “licensing the technology for personal use vehicles” and “working with cities to help strengthen public transportation.”

The announcement is a big new step in the company’s plans. Bloomberg reported in April that Waymo was exploring deliveries and logistics with Honda. The two firms have yet to make any official statement since first announcing talks in December 2016. Details are scarce, but the Bloomberg report suggested the Honda partnership could move people and goods in a vehicle smaller than a truck without a steering wheel or brakes.

Porat also noted that last week, Waymo announced it has completed eight million miles of autonomous driving on public roads, just five months after it reached the five million mark and just over three years after it achieved one million miles. The company is now driving at 25,000 miles per day, mostly in the Phoenix program, as it trains the computer system that CEO John Krafcik claimed will be “the world’s most experienced driver.”

From here, Porat said the company aims to finish rolling out its Phoenix rider program by the end of the year. As part of the plans to reach this goal, Waymo ordered 62,000 more Fiat Chrysler Pacifica minivans last month.

All this investment shows on the balance sheets. Alphabet’s “Other Bets” category, which includes drone delivery service Project Wing and life extension project Calico, generated $145 million in revenue. That’s up a third compared to the previous year, but the category cost $732 million in operating losses overall.