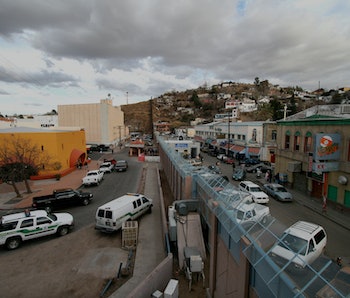 On Monday, a former Immigration and Customs Enforcement (ICE) agent appeared on Fox News, warning that the individuals in the migrant caravan traveling from Central America through the southern border of the United States might be carrying smallpox, tuberculosis, and leprosy, and are “going to infect our people in the United States.” This statement is completely unverified, but that’s beside the point, historians tell Inverse. Dangerous conversations like these, they say, continue a long history of using public health as a tool for xenophobia.

American University Professor of History Alan Kraut, Ph.D., author of Silent Travelers: Germs, Genes, and the “Immigrant Menace”, is not surprised this sort of language is being used.

“This pattern of blaming the foreign born for disease becomes a trope throughout American history,” he tells Inverse. “One of the ways of characterizing immigrants that you particularly don’t like is by using the metaphor of disease.”

The allegations that the migrant caravan is carrying those diseases has not been verified by any means. For one thing, the NIH holds that smallpox has been eradicated: The last time a natural case of smallpox was reported to the World Health Organization happened in 1978. Though leprosy and tuberculosis are both serious public health concerns worldwide, there’s simply no information showing that this group of migrants is carrying those diseases.

Rhetoric like that used on Fox News, says Kraut, have little to do with the science behind public health and far more to do with equating this migrant group with diseases that strike fear among the public.

“The problem becomes when individuals who are already nativistic in their inclinations use disease as a metaphor to describe others because of who they are not because of health conditions,” he says. “It seems to lend itself to a scientific justification but that couldn’t be farther from the truth. It’s the use of language to stigmatize people you already want to shun for another reason.”

That’s not to say that when people move from place to place, they never bring disease with them. But Kraut argues that the fear of the “immigrant menace” often grossly exaggerates the mechanics of disease spread.

For example, by the end of the 19th century, tuberculosis came to be called “the Jewish disease” as infections rose amidst a massive wave of Jewish immigrants from Eastern Europe during that century. There is no doubt that tuberculosis did wreak havoc: In the early 18th century, it caused 25 percent of deaths in New York City.

But the grave and dangerous error in thinking made in that situation — and the current one — says Kraut, is that it leads to disease being conflated with the inherent qualities of a group of (often foreign) people. That framing is incorrect. Rather, disease is something that affects a group of people, often tragically so, and can be contained through the proper public health policy.

Outbreaks, says University of East Anglia historian Becky Taylor, Ph.D., are often an indication of other public health factors affecting the spread of disease far more than immigration, like poor housing conditions or low immunization rates in the host country.

“Normally, people panic when there are large numbers of foreigners arriving, but in reality things settle down and are fine — if diseases spread it is normally an indication of poverty/poor public health in the receiving country,” she tells Inverse. “TB was endemic in European and US populations, and yet immigrants were persistently portrayed as a threat to health by bringing it into the country.”

If politicians are so worried about the emergence of infectious disease, she adds, stemming immigration probably isn’t the best use of their efforts. Especially not when issues like access to healthcare and housing will likely go far further to stem the spread. Nevertheless, it’s clear and unfortunate that, when it comes to creating a narrative justifying anti-immigrant sentiment, disease is a useful tool:

“If you want to frighten people or shun a particular group,” Kraut says, “what better metaphor could you use than a disease metaphor?”

More like this
Science
8.3.2022 3:44 PM
Ground-breaking technology restores dead organs back to a life-like state
By Miriam Fauzia
Science
3 hours ago
Ancient chicken bones and snail shells date the destruction of a Greek city
By Jennifer Walter
Science
8.14.2022 9:00 PM
Ancient lore reveals how warriors manipulated their enemy’s senses in battle
By Adrienne Mayor and The Conversation
Related Tags
Share: