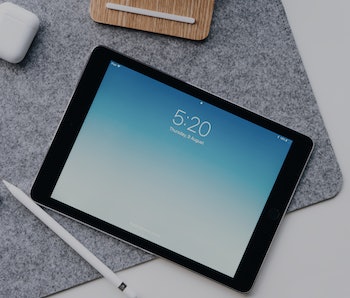 Apple may have inadvertently leaked its new iPad Pro in its iOS software elements, a Sunday report reveals. The company is expected to unveil an update to its tablet on Tuesday at an event in New York City, which ditches the home button in favor of a face recognition scanner and new swiping gestures.

The 9to5Mac report claims an icon found in the iOS operating system shows a simplified design of Apple’s new tablet, showing the slimmer bezels and array of buttons on the top right hand corner. The leak follows a previous discovery that showed how the new iPad would compare to the previous design, through user interface elements that may indicate the iPad to users through easy-to-understand icons. The changes suggest Apple will take a similar approach to that of last year’s iPhone X, dropping the home button and expanding the size of the screen. The publication notes that while the bezels look relatively large in these new designs, they also looked large in previous iPhone X icons and may be more for simpler identification than true representation.

See more: Apple October Event: Everything to Expect at This Week’s Apple Announcement

The new Face ID scanner is expected to make small quality of life improvements to make it easier to use on the iPad. This includes support for horizontal face scans for when the iPad is in landscape mode. However, reporter Guilherme Rambo claims the horizontal orientation won’t work during the enrolment process, with users requested to hold the iPad up if it’s on a surface and rotate to portrait.

Apple is expected to make a slew of announcements at its event. Among those listed include a new $999 MacBook that acts as a successor to the MacBook Air, with a 13.3-inch high-resolution “retina” screen. Other updates that could come during the event ‏are new Mac Mini updates, a new Apple Pencil and the possible release date of AirPower. Apple’s three-device charging mat was announced last September for a 2018 release but has since been missing in action.

All is expected to be revealed when Apple takes to the stage at the Brooklyn Academy of Music in New York City on October 30.

While a new iPad could bring some welcone changes, it could also spell the removal of the headphone jack.