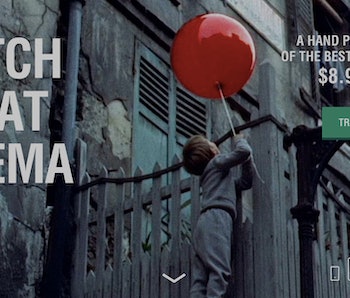 On Friday the popular streaming service FilmStruck announced that it would be discontinuing its service in the end of November. The streaming service made a name for itself by offering a better class of movies than mainstream services like Netflix. Think less Adam Sandler, more Criterion Collection. It was maybe a little pretentious, sure, but people loved it as evidenced by the collective outpouring of sorrow on Twitter.

“Filmstruck is shutting down, Videology is closing, and Netflix is too busy bankrolling nonstop Adam Sandler projects to care that it only offers about 43 movies made before 1970,” tweeted Zach Schonfeld, Newsweek’s culture writer. “WHY CAN WE HAVE NOTHING NICE,” asked the critic and writer Rachel Syme. Most of film Twitter was bereft over the news.

There’s understandable reason to be sad. As streaming dominates content consumption, that means fewer and fewer people who actually own the films they watch. It means fewer nerdy collectors, fewer under the radar films being passed around and traded. It means that more and more, we’re all watching the same handful of things. There’s nothing wrong with cycling through the same six sitcoms on Netflix — who wants to watch a documentary after 11 hours on the job? — but you also have to wonder how great, challenging film movies are supposed to continue getting made.

Fortunately, there is an awesome alternative to FilmStruck out there already for people who are particularly mournful of the FilmStruck’s decision to fold. It’s called Mubi, and streams “cult, classic, independent, and award winning films from around the world.” I’ve been a Mubi subscriber for a little over a year, after I got sick of my dad shaming me for re-watching the same Office seasons over and over and over.

Its library isn’t as big as FilmStruck, in fact Mubi only screens 30 movies at a time, with one leaving and a new one taking its place each day. But that’s one of the things that’s actually nice about it, you can browse through its entire offerings in about 20 minutes. And if a movie comes in that feels, idk, a little “heavy” for a Tuesday night, you still have a whole month to watch it.

It’s rare that I find movies that I’ve heard of on the service, though they did pick up There Will Be Blood and Blue Is the Warmest Color since I’ve been a subscriber. It helps guide relatively unsophisticated users like myself with a mix of thoughtful curation and series: Right now, for example, it’s running a number of movies under the banners October Horror, a retrospective of the French suspense film-maker Claude Chabrol, and some early releases from the New York Film Festival.

Mubi is also a bargain, imo, at only $8.99 a month. Sure, it’s a little bit like my New Yorker subscription in that I probably should use it more given how much I pay for it, but $2 to $3 a pop feels like a more than fair price to pay for movies that make me feel a little aspirational, like I’m doing something semi-constructive with my time while kicking it on the couch. If you’re mourning FilmStruck today, you should give Mubi a go.