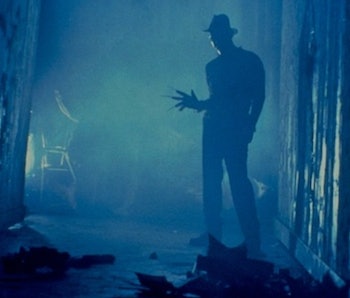 Jason’s bloodstained hockey mask hangs from the office door of Dr. Anthony Tobia, an associate professor of psychiatry at Rutgers University’s Robert Wood Johnson Medical School. It’s a chilling introduction to his October “didactics,” classes in which he and his residents watch a horror movie each night of the month through the spooky lens of psychiatry. Today, he’s showing his students a classic: the original Nightmare on Elm Street.

In the classic semi-slasher film, teenagers in a small suburban town are terrorized by child-murderer Krueger, who stalks and gruesomely eviscerates them in their dreams. Though Kreuger is pretty messed up psychologically, it’s the protagonist Nancy Thompson that Tobia wants us to watch with care. Over the course of the film, the residents will rule out a number of diagnoses, each more puzzling than the last.

Tobia is a horror movie buff, but when he watches those films with his residents, he hopes that they’ll look past the gore to see the real lesson. When I joined him and his residents in the school’s graduate student lounge — just one floor above the psychiatric hospital’s locked ward — I had no idea the lesson would be scarier than Kreuger himself.

With five of his second-year residents gathered on a couch, we begin to watch. They’re looking for clues in the movie that might help them check a potential diagnosis off their list.

Nancy, understandably, is refusing to sleep because a killer is tormenting her in her dreams. She describes these dreams to her mother in vivid detail and reveals bloody cuts on her arms where Freddy Krueger attacked her in his dream world.

“When we talk about sleep disorders, the first thing in our differential is basically what the title of this movie is telling us it’s about: reoccurring nightmares that become clinically significant,” Tobia says, before turning to his students. “How do you differentiate them in clinical practice from sleep terror disorder?”

This is an easy question for Andrew Parada, one of the residents.

“You remember nightmares,” he says.

Nightmares and dreams typically occur during rapid eye movement (REM) sleep. When someone remembers nightmares, it is because they have occurred during this time period, Tobia explains. But in some individuals, mostly children, terrifying dream-like states called night terrors can occur outside of REM sleep. In these cases, kids will sometimes cry and scream in fear, but strangely wake up the next morning with only fractured memories of the event.

But Nancy remembers her dream, which rules out night terror disorder. With that established, Tobia moves on to the next scene, in which Nancy’s mother takes her to a dream clinic to figure out why her daughter can’t sleep through the night.

Nancy drifts off in the presence of a full lab team, who monitors her sleep state through polysomnography, a test that measures brain waves, blood oxygen, heart rate, and breathing while sleeping. As she drifts into REM sleep, Parada notices something.

“Right after she went Ito REM, she started to convulse,” he says. “She started to actually have spontaneous physical movement.”

This is strange for a number of reasons, Tobia says. People aren’t supposed to move during REM because the body enters a state of sleep paralysis. (It’s thought that this evolved so people wouldn’t act out their vivid dreams, which could lead to fatal accidents.) But in the movie, Nancy writhes in pain and fights back against Krueger in her dreams, which should be impossible.

“That means that Wes Craven did not freshen up on his neurophysiology,” says Tobia. “But we can take some creative license with this.”

From the back of the room, resident Namrata Kulkarni suggests that Nancy might have REM Sleep Behavior Disorder, a condition that allows people to literally act out their dreams, even during REM. This diagnosis would explain the lack of sleep paralysis, Tobia admits.

But he thinks there’s a better diagnosis still.

Tobia asks his students to take note of the time it takes Nancy to enter REM. It should take a normal person between 60 and 90 minutes to enter REM sleep. Nancy achieves it in less than three, going by the movie’s timestamp, but taking artistic license into account, Tobia estimates that in the film’s timeline, it takes about ten minutes.

“Once we understand that, we know what’s going on in Nancy is pathological because a person who does not have a sleep disorder will not REM within ten minutes,” he notes. “That’s not normal.”

Rapidly descending into REM sleep — also called decreased REM latency — isn’t a great sign. In fact, Tobia explains that it’s part of the definition of narcolepsy, a sleep condition that usually causes excessive daytime tiredness. According to the NIH, a person qualifies for a narcolepsy diagnosis if the fall into REM sleep in eight minutes or less over five naps.

“We have to agree with Wes Craven and say that if he named it Narcolepsy on Elm Street, it wouldn’t have become a classic,” Tobia says. “Nightmare on Elm Street really doesn’t have anything to do with nightmares. This movie is really about narcolepsy.”

The point of Tobia’s didactics is to expose his students to the different factors that can contribute to a psychiatric condition. Through the terror of Nightmare on Elm Street, the students considered that sleep-related psychiatric conditions and poor sleep could be exacerbated by a psychotic dream murderer but also acknowledged the less obvious, more insidious factors at play.

One student brought up the importance of “sleep hygiene” — the idea that you should never do anything in bed except sleep and have sex if you want to maximize sleep time at night. I’m well aware that chronic sleeplessness is a growing concern nationwide — the CDC even called sleep deprivation a “public health epidemic. I’m also well aware of my habit of lying in bed while simultaneously scrolling through Instagram and watching Frasier. The film over, I confessed these poor night-time habits to the residents.

Fortunately, they were sympathetic — we’re all guilty of these things once in a while. Besides, the point of Tobia’s didactic is to learn to help people by approaching them with an open mind, even if their narratives include outlandish tales of psychotic dream murderers.

“We listen to a lot of narratives from a clinical perspective, and I never thought of taking the ones from pop culture,” says Parada. “It’s fun doing this job. It’s fun figuring out their lives and how they see their troubles. It’s fun helping them get to a point where they can overcome that.”

The residents don’t seem to care for this movie very much, but they can admit that Nancy is the kind of patient a doctor can never forget.

“It helps stick because we’re looking at it through a movie character,” says resident Tanei Kohli. “So now with a patient if something like narcolepsy comes up I’m going to think of this Nancy girl.”