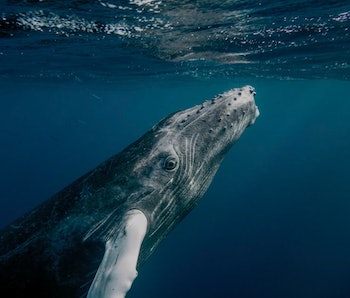 When a ship cuts through the ocean, its churning propulsion system generates underwater noise that’s as loud as a rock concert. For the animals that live under the passageways of commercial vessels, this is a huge problem. Scientists increasingly understand that these ship sounds are detrimentally affecting marine life, and a new study adds singing humpback whales to the list of animals impacted by passing ships.

In a study released Wednesday in PLOS One a team of Japanese scientists reveal that male humpback whales that live around the Ogasawara Islands are changing their tune because of the sounds emitted by a passenger-cargo liner that sails past them once per day. With the help of underwater acoustic measurements, the scientists determined that the whales reduced their singing after the ship passed. At some times, the whales even stopped singing altogether.

Whale-song, ship noises, and the location of the whales were measured between February and May 2017, their breeding season. The scientists determined that fewer male humpbacks sang in the area within 500 meters of the shipping lane than elsewhere, and whales within 12,000 meters of the lane paused their singing or stopped singing altogether in the moments after the ship passed. The whales that stopped singing didn’t begin to sing again until at least 30 minutes after the ship had gone.

“Humpback whales seemed to stop singing temporarily rather than modifying sound characteristics of their song under the noise, generated by a passenger-cargo liner,” the scientists write. “Ceasing vocalization, and moving away could be cost-effective adaptations to the fast-moving noise source.”

Humpback whales aren’t alone in being affected by shipping noise. In 2016, scientists announced in a PeerJ paper that persistent noise disturbances near shipping lanes are hindering the ability of killer whales to communicate and echolocate — a major issue because they rely on these skills to hunt. The team behind this new study hasn’t speculated on how song reduction will affect the humpback whale population of the Ogasawara Islands, though scientists do know that male humpback whales use songs to attract mates.

While a range of marine animals is affected by shipping noises, they don’t all react in the same ways. In this case, the whales ceased singing — but according to a study also published Wednesday in Biology Letters, dolphins actually increase how much they communicate when they encounter damaging ocean noise. That study’s authors explain that increased ship noise is linked to higher dolphin whistle frequencies and “a reduction in whistle contour complexity, an acoustic feature associated with individual identification.” That’s a problem because changing whistles, in turn, decrease effective communication and group cohesion.

Meanwhile, ship noise is poised to be a persistent issue. Already, ambient noise in the ocean has increased significantly over the past half-century because of the thousands of commercial ships that consistently and continuously cross the sea. Scientists at Woods Hole Oceanographic Institute posit that this will only get worse: In a 2016 paper in Marine Policy, they wrote that the noise capacity of commercial shipping will nearly double by 2030. Some researchers are working on creating new noise regulations and ship technology that will quiet the seas — but until there’s an international agreement on ship standards, whale songs will likely continue to be silenced.

Reactions of singing behavior of individual humpback whales (Megaptera novaeangliae) to a specific shipping noise were examined. Two autonomous recorders separated by 3.0 km were used for the acoustic monitoring of each individual song sequence. A passenger-cargo liner was operated once per day, and other large ship noise was excluded given the remote location of the Ogasawara Islands, 1000 km south of Tokyo. In total, locations of between 26 and 27 singers were measured acoustically using time arrival difference at both stereo recorders on the ship presence and absence days, respectively. Source level of the ship (157 dB rms re 1μPa) was measured separately in deep water. Fewer whales sang nearby, within 500 m, of the shipping lane. Humpback whales reduced sound production after the ship passed, when the minimum distance to the whale from the ship trajectory was 1200 m. In the Ogasawara water, humpback whales seemed to stop singing temporarily rather than modifying sound characteristics of their song such as through frequency shifting or source level elevation. This could be a cost effective adaptation because the propagation loss at 500 m from the sound source is as high as 54 dB. The focal ship was 500 m away within several minutes. Responses may differ where ship traffic is heavy, because avoiding an approaching ship may be difficult when many sound sources exist.