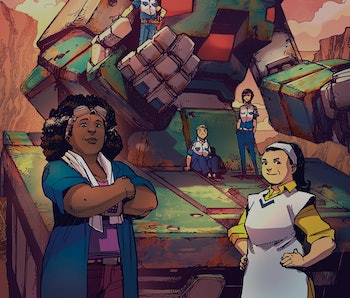 Elon Musk has called for the creation of a “mecha,” prompting speculation about how the tech entrepreneur could take a classic science fiction concept and bring it to reality. Musk made the declaration to his 22.9 million Twitter followers on Sunday, leading to numerous fan responses and fantastic photoshops.

The mecha, or “mech,” is a somewhat hazy concept that generally refers to a giant mechanical humanoid robot. The Enyclopedia of Science Fiction suggests Jules Verne’s 1879 work La Maison à vapeur and H. G. Wells’ 1898 The War of the Worlds as credible origins, but the mech was solidified in Japanese sci-fi like Tetsujin 28-go and Mazinger Z. The idea grew in popularity with Mobile Suit Gundam, while some works like The Matrix Reloaded blurred the line between mech and exoskeleton.

It’s unclear what sort of mech Musk has in mind, but he’s no stranger to big ideas. SpaceX is currently working on the world’s most powerful rocket to send humans to Mars in the form of the BFR, the upcoming Tesla Roadster is set to reach 60 mph in just 1.9 seconds, and the hyperloop could theoretically blast people in a vacuum-sealed tube at up to 700 mph.

Bandai Namco was quick to remind Musk of its Gundam credentials:

One fan suggested mixing the “Starman” riding through space in his Tesla Roadster with The Boring Company’s “Not-a-Flamethrower” for the ultimate fire-shooting rocket man:

Another user suggested Musk had finally completed his transformation from Naked Snake into Big Boss, following the path laid out by the Metal Gear Solid video game series:

Other users volunteered to get going:

Other developers have tried their hands at creating mechs. Designer Vitaly Bulgarov demonstrated the “Method-2” back in January 2017, a 13-foot machine that weighs over 1.5 tons and houses a single commander in its body. Another designer, Masaaki Nagumo, went one step further in April with his Gundam-inspired machine at 28 feet tall — so big, in fact, that he had to take it apart to get it out of the factory.

Whether Musk can beat these two beasts remains to be seen.