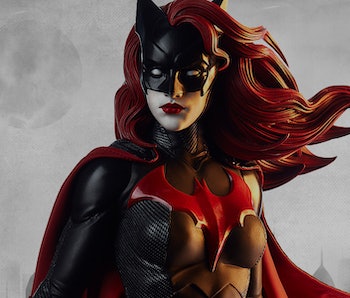 Batwoman is finally here. The CW has finally delivered the first look at the character in her Arrowverse costume, and for any DC fans tired of inaccurate Batwoman costumes this one may set things right.

Shooting for this year’s Arrowverse crossover, “Elseworlds,” just began, and the network released the first official photo of Ruby Rose in costume as Batwoman. Rose’s version of Cassandra Cain has a mane of bright red hair and vampiric pale skin, just like her comics counterpart. The costume features a bright red bat symbol on the chest, and her faded red utility belt is just a tad off-kilter.

Most of the costume’s black leather is straightforward enough with a practical pattern that includes red lining in the forearm sleeves instead of bright red gauntlets. If there’s one key difference between live-action and the comics, it’s in the shortening of the cape and the change in coloration. Normally, the inside lining of Batwoman’s cape is a bright red that matches her insignia, but here’s the red coloration is more of a gradient that blends with black. That’s much more practical, especially in terms of stealth.

What’s the point of a long cape anyway?

The backdrop is undeniably Gotham, and the building under the bat signal is definitely Wayne Tower. Does that mean Bruce Wayne and Batman do exist in this world, and if so which world is it?

Ruby Rose’s casting as Batwoman was first announced in August 2018, and just one week later Arrow star Stephen Amell teased that he’d just witnessed someone “try on a superhero suit for the first time.” Could that have been the screen test of sorts that produced this image, or at the very least a trial run? Possibly.

When Batwoman joins the Arrowverse in December, she’ll be joined by Tyler Hoechlin reprising his role as Clark Kent and Superman, but the show will also introduce Lois Lane and Mrs. Freeze into the mix.

We still don’t know much about the “Elseworlds” crossover, not even what dimension it takes place in, but it’s only two short months away.

The three-night “Elseworlds” Arrowverse crossover begins with The Flash at 8 p.m Eastern on Sunday, December 9 and continues on Arrow at 8 p.m. Eastern on December 10, ending with Supergirl on December 11 at the same time.