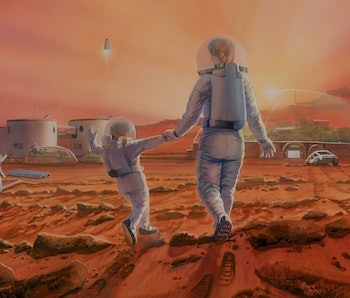 Scientists are figuring out how we will eat on Mars, govern on Mars, and even pray on Mars, but one crucial question persists: How will we deal with the effects of space radiation on Mars? On Earth, we’re protected by our atmosphere and magnetic field, but on Mars future colonists will be naked against cosmic rays. We’d better how to figure out how to protect ourselves from it soon, as new research suggests that we won’t last long without getting sick.

In a paper published Monday in the journal Proceedings of the National Academy of Sciences, a team of researchers from Georgetown University show that deep space radiation can have significant damaging effects on the small intestines of mice, increasing the risk of cancer. This damage persisted for a year after exposure to the radiation.

In particular, they studied the effects of ionizing radiation, a type of radiation found in space. Ionizing radiation consists of beams of high-energy particles with so much energy they can knock the electrons and protons off of atoms; in this case, the researchers used heavy iron (56Fe) ions in their experiments at the NASA Space Radiation Laboratory, bombarding mice with a low dose.

The team used a dose of radiation comparable to what would be experienced on a trip to Mars. “Since the estimated radiation dose for a 1,000-d Mars mission is about 0.42 Gy, with an estimate of an 860-d Mars mission dose equivalent of ∼1.01 Sv so doses of 0.5 Gy or less are more relevant, we have used 0.5 Gy to study [intestinal epithelial cell] migration, which is important for intestinal homeostasis,” the team writes.

Significant DNA damage in the small intestines of the mice and slowed migration of intestinal epithelial cells occurred as a result. The effect of DNA damage is associated with an increased risk of cancer, and indeed, the study’s authors observed cell growth in the presence of this DNA damage that suggested a higher risk of cancer.

“Epithelial cell turnover is important for maintaining overall GI health, and its perturbation by space radiation, as well as by heavy-ion radiotherapy, raises concerns that require an understanding of its molecular underpinnings,” wrote the study’s authors, led by Santosh Kumar, Ph.D., a postdoctoral fellow at Georgetown. “Altered migration of intestinal epithelial cells could not only compromise barrier function and nutrient absorption but could also prolong exposure of cells to luminal content and initiate stress responses with pathological consequences, including colon cancer.”

This study raises new, serious questions about how ionizing radiation could affect astronauts on long, crewed flights to Mars or the people who eventually settle there.

As Inverse previously reported, “a crew going to Mars would probably be exposed to about one gray of radiation — over 277 times the dose of normal year’s worth of radiation exposure on Earth.” Longer missions would increase exposure and, in turn, increase cancer risk, not to mention the risk of acute radiation poisoning. Scientists have proposed shielding mechanisms, as well as protective drugs, though so far scientists haven’t come up with anything that can defend humans against this cosmic bombardment.