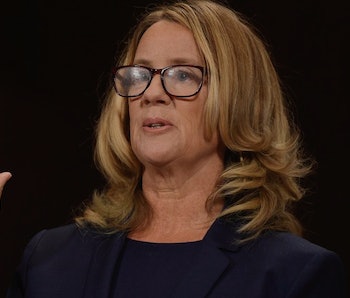 As prosecutor Rachel Mitchell wrapped up her questioning of Dr. Christine Blasey Ford on Thursday, she mentioned that a “forensic interview” would have been a more effective way to get to the truth of the matter. Mitchell, who was hired by Republican members of the Senate Judiciary Committee, had already spent several hours questioning Ford during Supreme Court nominee Brett Kavanaugh’s confirmation hearing. But those “five-minute increments” with Ford did not provide a good format or setting for examining traumatic memories of the sexual assault that Ford says Kavanaugh perpetrated against her in 1982.

Instead of piecemeal questions to get at details of the assault, Mitchell suggested that the structured format of a forensic interview would have provided more helpful information. But it’s a process that might not be familiar to anyone who doesn’t have experience working with children or vulnerable adults who have survived trauma.

Mitchell’s comments struck some analysts as an attempt to redirect attention from Ford’s sympathetic and credible showing at the hearing. Others have criticized Mitchell’s vaguely insinuating question as an attempt to undermine Ford’s credible testimony by suggesting that the whole situation is flawed.

Needless to say, Mitchel’s comments in the final moments of Ford’s portion of the hearing seemed to acknowledge the inherent shortcomings of the process. She raised a lot of questions about her role, not the least of which was what is a forensic interview, and why did she bring it up?

What Is a Forensic Interview?

To put it simply, a forensic interview is a method for gathering information from a victim that can be used in court or other legal proceedings. A forensic interview is meant to yield factual information that will stand up to scrutiny in a courtroom. Typically, it’s associated with children who’ve undergone trauma since it’s one of the primary tools employed in cases concerning child welfare. In a forensic interview with a child whose health or safety is being investigated, a trained professional interviewer will try to determine the facts behind a situation in which the parties involved may have differing accounts. According to the Children’s Bureau of the Department of Health and Human Services, a forensic interview consists of three distinct phases:

With the information gathered in a forensic interview, a law enforcement officer, mental health professional, or child protective services caseworker can prepare to bring an abuse victim’s story to court. But a forensic interview is not just applicable to children, which brings us to the reason why Mitchell brought it up to Ford on Thursday.

Why Would Rachel Mitchell Ask Dr. Christine Blasey Ford About a Forensic Interview?

The fact is that in rare cases, adults who have been victims of crime are also considered candidates for forensic interviewing.

That being said, forensic interviewing for adults usually only occurs in cases in which an adult is considered “vulnerable,” meaning that they are not able to take care of themselves. For that reason, it’s especially unclear why Mitchell would bring it up in Ford’s case. As a college professor who appeared to understand the proceedings quite well, it seems safe to assume that she is not vulnerable and her cognitive abilities are not in question, therefore, she would likely not be eligible for a forensic interview.