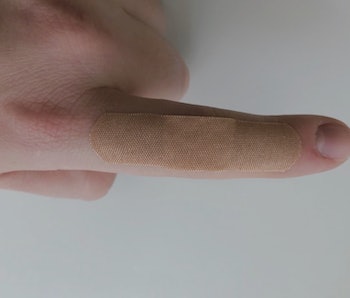 Advances in wearable tech have been pretty impressive lately, but the device described in a new Nature study blows the competition out of the water. While the Apple Watch is now equipped with an FDA-approved EKG sensor and companies like Samsung are going out of their way to make smartwatches look like fashion statements, the device described in the paper, published Wednesday, puts both to shame. This heart-sensing device has no wires, requires no charging, and is so small that it can wrap around a rat’s heart.

Study co-author Kenjiro Fukuda, Ph.D., a research scientist at Japan’s RIKEN Center for Emergent Matter Science is quick to say that his device represents a big step forward for wearables. It looks more like a band-aid than a watch, and it’s thinner than a piece of cardboard.

A Device You Can Flex With

While Fukuda’s device isn’t more powerful than any existing heart-sensing technology, it does solve one of the more pressing issues of smartwatch trackers: flexibility. Human bodies move in strange and unpredictable ways, so devices that detect heart rate on the wrist can sometimes be confounded by awkward motions.

“Such ultra-thin devices enable better conformability than conventional wearable devices such as a smart-watch,” he says. “This can lead to better and more stable monitoring than such conventional devices.”

In early tests, the team was able to wrap the device around a rat’s heart, where it tightly adhered to the slimy, round surface. Their trial revealed that, despite the uneven pounding of the rat’s stressed-out heart, the device could record each heartbeat accurately and then transfer that data to an external device. Even a high-end chest strap heart rate monitor likely wouldn’t accomplish this task.

The test on the rat heart was flashy, but where this device really breaks ground is in the way it’s powered. This team was able to implant tiny organic solar cells on the device that can convert light into electricity. The idea was to create a self-sustaining wearable that never has to be taken off.

Developing solar-powered wearable technology has proved challenging for other researchers, says Fukuda, because it’s hard to be sure that those crucial solar cells are getting the right amount of sunlight if a person is bending, flexing, and constantly changing the device’s angle in relation to a light source.

His device solved this quite elegantly: He created a “nano-grating” surface on portions of the solar cells that absorb light. This microscopically rough surface helped mitigate the effects of strange, indirect angles on the cell’s light absorption. Fukuda goes so far as to say that this technique allows for “light angle independency” in the solar cells.

The idea behind this device, and others like it under development at Fukuda’s lab, is to create wearables that act more like second skin than fashion statements. But while they seem to have made progress on making their devices seamless, they still have a way to go before their devices are up to medical standards. Still, Fukuda is hopeful.

“Our devices don’t expect more precise monitoring than conventional ECG monitoring device used as medical checkup,” he says. “If accuracy is further improved, this can be also used as imperceptible electrocardiogram systems for healthcare/medical use.”