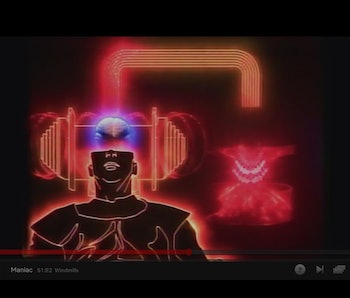 In Netflix’s new sci-fi series Maniac, science blends with fantasy to depict a miracle cure for, well, whatever’s wrong with your mind. The show’s retro-future technological landscape centers on an experimental psychiatric treatment comprising a supercomputer, microwave-powered brain imaging, and mind-expanding drugs. This mix of technology and magic (or something like it), along with the rest of the set design, make it hard to tell whether events are taking place in the past, present, or future. For instance, Ad Buddies make it possible to pay for purchases by listening to advertisements recited by a real person who tags along with you, like a horribly dystopic future version of extant internet revenue models. But at the same time, one of the main characters, Annie (Emma Stone), buys a pack of cigarettes in New York City for only $2.49, a steal by current standards.

All of the weird scene-setting stuff is just background to the central intrigue of the experimental psychiatric treatment, though, which involves a combination of medication-assisted therapy, brain imaging, and transcranial stimulation. Both motivated by their own demons, Annie and Owen (Jonah Hill) take part in a clinical trial of a psychiatric treatment for an unspecified condition — or no condition in particular. While the purpose of the therapy isn’t totally clear, it seems to be aimed at helping people get past their past traumas and the lasting consequences wrought by them.

And despite the fact that the bizarre treatment is essentially just a narrative vehicle for the characters to go on a journey of self-discovery, it does bear some meaningful resemblance to what scientists know about treating deep-seated traumatic memories, including recent research using the psychedelic empathogen MDMA.

When Annie and Owen begin the clinical trial in Episode 2, they’re introduced to Dr. Mantleray (Justin Theroux) via a Tim-and-Eric-esque welcome video. He explains that the treatment happens in three parts that are meant to “identify, map, and confront the learned programming of your brain.” Each part involves a specific pill that’s taken during a session in a microwave brain imaging device. The first pill, shaped like a letter A, is called Agonia — Latin for agony, death, or struggle. This pill is meant to bring up your trauma so that the computer can observe it and come up with a personalized roadmap for healing, incorporating the findings into the formulations for pills B and C. Mantleray explains that pill B, called Behavioral, is intended to “identify self-defense mechanisms, blind spots, and the mazes and walls that your mind creates to hide yourself…from you.” Finally, pill C, Confrexia, brings “confrontation and acceptance.”

While the treatment is fiction, it bears a resemblance, at least in spirit, to how researchers are learning to treat posttraumatic stress disorder.

PTSD is characterized by frequent and intrusive thoughts stemming from a traumatic event. The disorder gets in the way of everyday life, causing objectively safe reminders of the event to trigger fear responses, flashbacks, or anxiety attacks. In a major sense, pills A and B mirror the ways in which psychologists treat patients with PTSD. In cognitive behavioral therapy, one of the gold standard treatments for PTSD, a therapist guides the patient in confronting the reality of their trauma, challenging the unhelpful cognitive distortions that accompany it, and developing coping strategies that change their relationship to the trauma.

So in a way, the idea behind pill B is pulled straight from CBT since PTSD manifests as a way for a traumatized person’s mind to protect them from something it knows to be dangerous. For instance, if a combat veteran experienced the death of their friends in a bomb attack, it makes sense on the level of survival that triggers that remind them of the event — perhaps the startling percussive sound of an engine backfiring on a city street — would send the body and mind into fight-or-flight mode to survive. But since PTSD causes the person to react emotionally and cognitively to these triggers regardless of whether there is real danger present, this defense mechanism becomes distorted, an overreaction that invades everyday life and which the patient can’t control.

Neuroscientists have found that this emotional response to trauma may bear physical signs. It seems to actually change the way that the brain behaves.

Research in rats has shown that fears brought on by traumatic events actually change the way neurons fire, creating a physical fingerprint of the trauma that emerges when the rat is exposed to a reminder of the trauma. In a study published in Science in June, researchers observed this phenomenon in rats they’d trained to be afraid of a box they’d gotten electrocuted in. When they went into the box later, they exhibited distinct patterns of neuronal activity, a marker of the traumatic memory. Even once rats had been exposed to a non-shocking box several times to help them realize they were safe again, their brains still exhibited the old fear response. But they also exhibited a new response on top of it, one that told the rats they were safe. This suggests that while it might not be possible to eliminate traumatic memories, the response to the memories can be modified to take away some of their emotional power.

That research was performed on rats, but it fits with what psychologists have observed in patients with PTSD. Pharmaceutical research on human subjects has also shown that it’s possible to diminish the emotional power of traumatic memories, making it possible for people with PTSD to function normally again.

In May, researchers published a paper showing that veterans, police officers, and firefighters with PTSD who received MDMA (3,4-methylenedioxymethamphetamine) in conjunction with psychotherapy showed significant and lasting reductions in their symptoms. In fact, one month after the last of two eight-hour sessions, 68 percent of participants who received a full dose of MDMA no longer met the criteria for a PTSD diagnosis.

This real-world therapy follows the same basic framework as the experimental treatment in Maniac: Since MDMA helps decrease fear and increase openness in patients, it fosters a mindset in which people living with PTSD can confront their trauma without triggering the old, unhelpful emotional responses. To a significant degree, this research incorporates the C pill, too, since it allows them to confront and accept the harm of their pasts.

Oh, and regarding the whole microwave thing in the experiments in Maniac, the weird chairs and lead vests may have helped create a sci-fi mood, but the reality is that microwave tomography, a real-world medical technology, is not an advanced type of brain scanning device. It’s less sophisticated than technologies like fMRI for observing the brain in action, and it certainly wouldn’t be able to record a narrative from someone’s dream.

But it’s cool and mysterious to see on-screen, plus the word “microwave” even evokes images of post-war consumerism and techno-optimism. Even without the bells and whistles, though, the fact is that Maniac does a pretty good job of laying out what therapy for a person with unresolved trauma looks like. Fortunately, the reality is that psychiatrists and psychologists are on the verge of making MDMA-assisted psychotherapy a reality for people living with PTSD. And all without the need for a clunky microwave headset or protective lead vest.