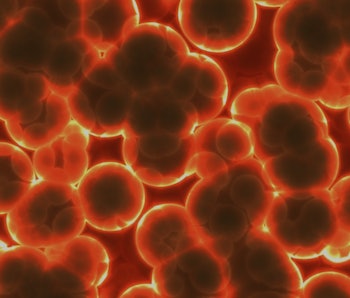 Every moment, billions of microorganisms, chemicals, and fungi from every corner of the globe invade your personal space, creating a cloud that’s unique to you. For years this microbiome cloud, or “exposome,” has been a black box — we know that it’s there, but we haven’t quite had the tools to peek inside. Now, a team of researchers at Stanford have developed a wearable that can probe its murky depths, and one day, they hope to put their technology on your smartwatch.

In a paper, published in Cell, the researchers compiled data on our exposome based on 70 billion readings their device. They identified more than 40,000 different types of bacteria, viruses, and fungi that linger in our airspace — some of which are friendlier than others.

“We have no idea what our environmental exposure is,” Michael Snyder, Ph.D., senior study author and director of Stanford’s Center for Genomics and Personalized Medicine tells Inverse. “What the actual breakdown is especially with chemicals isn’t actually known. No one has really studied that before.”

Some of the invisible things we’re exposed to are pretty harmless and fluctuate by season. For example, fall tends to bring some types of molds and yeast into our orbit, while certain mushroom spores peak in the winter, Snyder says. During periods of rain, his device also detected chemicals like geosmin, the compound that gives off the “earthy” smell after a rainstorm.

But some clouds had a more sinister personality. The exposome of one study participant from San Francisco had a high amount of Alkanindiges, a bacteria typically found in sewage plant sludge. Others showed amounts of Aspergillus, a fungus that can sometimes cause a mold to grow in human lungs. And all 15 individuals in the study had traces amounts of DEET and omethoate (both insecticides used to kill mosquitoes), as well as diethylene glycol, a poisonous organic compound.

“It’s important to know where these things are coming from so then you can control them. I think where we see this going, in the long run, is that before you buy a house, maybe you don’t do it if there are these dangerous chemical exposures,” says Snyder. “I think it puts you in control of your exposure to these nasty things.”

Devices to measure particulates in the air already exist, but they are usually static. They’re placed in a room or on city rooftops, where they can measure levels of certain elements but can’t detect precisely what kinds of things —dangerous or not — each individual is exposed to.

Synder’s wearable is different. Even though he’s worn it for two years straight himself, it’s still a long way off from being reasonable for daily use for most of us. Right now, it is pretty bulky — about the size of a large matchbox. It also has to be strapped to the upper arm in order to constantly take air samples at about half of a liter per minute.

Although Synder’s device is definitely too clunky to compete with the likes of Apple or Samsung, his approach and exposome analysis are an interesting realm that wearable tech has yet to probe. While we have watches that can detect heart arrhythmia, we’ve yet to see a major brand create a wearable with the ability to detect all the different, and potentially dangerous, compounds in the environment.

“Somewhere down the line I’d like to see this as an inexpensive portable device that everyone can wear,” he says. “We need a version of this that’s inexpensive, that we can take wherever we go.”

More like this
Science
Sep. 23, 2022
We finally know how many ants are crawling the Earth right now
By Jennifer Walter
Science
Oct. 1, 2022
Ancient humans forged hybrid species at critical periods in our evolution
By Penny Spikins and The Conversation
Science
Oct. 5, 2022
The secret to saving our planet may be lurking in the dirt under our feet
By Tara Yarlagadda
Related Tags
Share: