“Those kids had to get puked on for like six hours straight.” 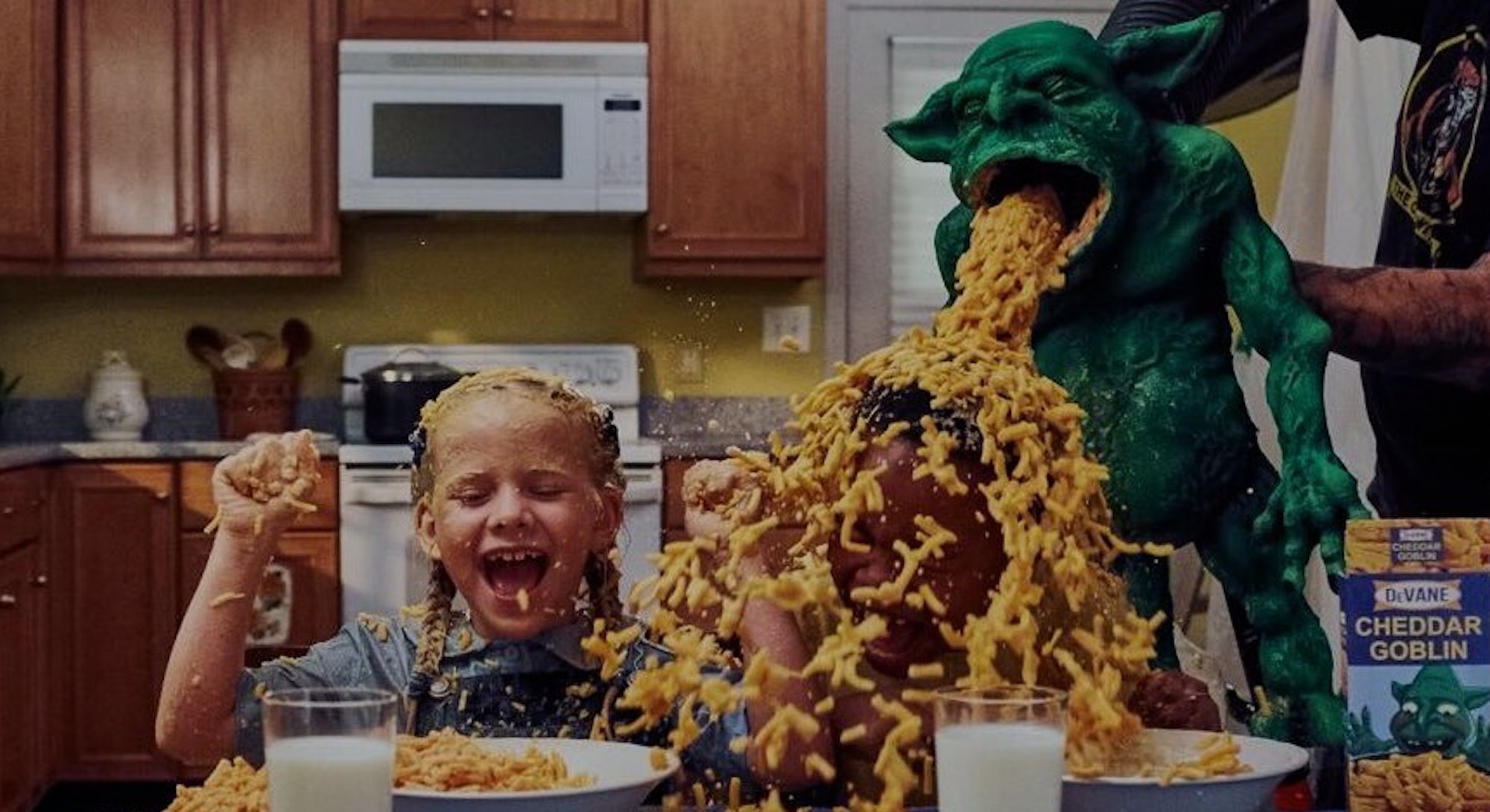 There’s a scene in Mandy, the new blood-soaked 1980s-inspired Nicolas Cage movie currently in theaters, where Cage’s character watches TV in his underpants.

That may sound like the perfect opportunity to duck out for a bathroom break, but if you do you’ll be missing the best part of an already-great film: the Cheddar Goblin.

The Cheddar Goblin is the terrifying mascot for a fictional brand of mac & cheese, and in the trailer, we see him emerge from a bowl of macaroni to vomit cheesy pasta all over a pair of smiling children. Yes, it’s extremely weird, but considering who made it you shouldn’t be surprised. Inverse spoke to practical effects expert Shane Morton (who helped create Smarf the cat in Too Many Cooks) about the insane process that went into making the Cheddar Goblin a reality.

“It was a crazy shoot,” Morton recalls. “20 gallons of mac and cheese mixed with pineapple Faygo and lemon Jello. So it really kind of smelled like vomit. Those kids had to get puked on for like six hours straight.”

The entire process, from creating the Cheddar Goblin to watching it go viral would prove to be even crazier.

Morton didn’t know what he was signing up for initially. Casper Kelly (the creator of Too Many Cooks), approached him on the set of Adult Swim show Your Pretty Face Is Going to Hell with an interesting proposal.

“Casper was like, ‘I know this was insane and crazy but what do you think about shooting a crazy TV commercial with a monster puppet for the guy who did Beyond the Black Rainbow?’”

There wasn’t a lot of money involved, but Morton jumped at the opportunity to work with Panos Cosmatos, whose 2010 sci-fi horror film has achieved cult status in the years since its release. The opportunity to collaborate with Casper Kelly on another weird video after the insane success of Too Many Cooks was also too good to pass up.

From there, the next step was to create their monster. Morton, who calls himself a “total nerd” for ‘80s nostalgia, took his inspiration from another horror cult classic, the 1985 film Ghoulies. He specifically mentions the original movie poster, which features an off-brand green monster rising up out of a toilet.

“It really sums up that whole 80s thing,” Morton says. “As soon as I said let’s do Ghoulies meets Yoda meets Satan they were like, ‘Yeah let’s go in that direction.’”

From there, Morton drew up a sketch, followed by an initial sculpture that took about four hours to complete. He created the mold and painted the final Cheddar Goblin puppet during lunch breaks on set over the course of two days.

As intense as that sounds, shooting the Cheddar Goblin trailer was even crazier. Beyond the logistics of having a green goblin puppet puke mac & cheese on children, Morton also obsessed over making sure every single detail was as accurate as possible.

“I just wanted to be really 80s,” he says. “That’s why he’s got a really bright paint job. The whole thing takes place in 1983 so everything had to be very specific. We were very careful about what the mac & cheese boxes looked like. How the children were dressed. We had to find the right kitchen.”

Now that Mandy is in theaters, it looks like Morton and Kelly may have another viral hit on their hands with the Cheddar Goblin. There’s a Twitter account with thousands of followers, GIFs of the scene keep leaking online, and one fan even made a Cheddar Goblin action figure.

Morton is also being careful not to squander this opportunity, noting that while Adult Swim did release a Smarf action figure they probably could have sold thousands of plush dolls thanks to the success of Too Many Cooks. This time around, Morton is leading the charge, with meetings planned in LA over the next few days to talk merchandising opportunities.

But perhaps more importantly, he says he’s proud to have contributed to Mandy with what he sees as a pivotal scene in a movie that’s already achieving cult status.

“People are saying the Cheddar Goblin is the greatest cinematic moment of 2018,” he says. “It’s the thing that happens that changes the movie. There’s all this tension and then it hits this button and everyone laughs and then the movie takes off. It’s crazy. It was a fun thing we did in two days but it ended up really meaning a lot.”

Mandy is in theaters now.