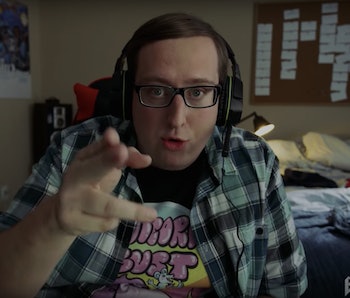 It’s been four long years since Too Many Cooks broke the internet. Now, the creator of the viral parody of saccharine sitcoms is back, and this time, he’s taking on what kids today are watching over crusty network TV: Twitch streamers. In spoofing the ocean of personalities who livestream their video games commentary, Casper Kelly and collaborator Nick Gibbons ended up making prototypes of real games they admit they would totally play themselves.

“It was fun to create fake versions,” Kelly tells Inverse. “We liked Unicorn Bust. We thought Unicorn Bust could be a real game.”

Originally airing at 4 a.m. last week on Adult Swim before going up on YouTube, Final Deployment 4: Queen Battle Walkthrough begins as a spoof of modern triple-A blockbuster games like Call of Duty and Gears of War. But before too long the “game” — played by a white 30-something with the handle “BlairTrigger” — gamifies the maddening banality of civilian life for a soldier with PTSD. Then, without warning, Final Deployment 4 reveals BlairTrigger’s walkthrough is only the beginning.

As BlairTrigger resumes real life, it’s revealed that he’s actuallyliving in a game too, this time played by a different streamer. As is her life. And the one playing hers. And so it goes until we’re treated to a disorienting ouroboros of streamers controlled by other streamers, all hopeing to get their viewers “to hit that subscribe button.”

Final Deployment 4 is, in essence, an H.P. Lovecraft tale by way of PewDiePie, an ancient nightmare wrapped in a dizzying user interface. Most notable about Final Deployment is that it uses fake video games based on wildly different existing titles and genres — from Batman: Arkham Knight to Candy Crush — that were rendered by two studios, Turner Studios and Awesome Incorporated. They made the games for real, and recorded footage just like machinima.

Nearly all of the games were built in the Unreal Engine, a popular software created by Epic Games (the company behind mega-hit Fortnite) and used by countless developers in the industry. Other popular games made in Unreal include everything from Mortal Kombat X to Rocket League.

“The guy in charge of the team is a gamer,” Gibbons says. “It was a playable game. That’s how you recorded the footage. It was in-game footage.”

Whenever Kelly and Gibbons asked for “small changes,” it meant “he’d have to play the thing again and record it. Just like a real game, ‘I gotta do that level over.’”

“The designers were designing these games looking at each other, like ‘We should make these games,’” Gibbons adds.

Of course, being a small-budgeted project, the level of detail weighed down the post-production process. “It had so many layers in the edit, Adobe Premiere couldn’t open it,” Casper recalls. “It would take 45 minutes to open and it would crash. So we had to render a version as a QuickTime and put layers on top of that one. It was a big thing.”

Though conceptualized independently from the 2014 viral hit, director Casper Kelly says he welcomes seeing Too Many Cooks and Final Deployment 4 as part of a thematic series. “It is a sequel of sorts, but we didn’t think of it in those terms,” Kelly tells Inverse.

When I give him my personal interpretation — that Cooks is an observation of the past and Deployment is the present — he buys it. “I love that,” he tells me. “I’m like, ‘Oh my god that’s true.’ It’s about the choices we make in the present. Are we in control? Are we making the right choice?”

Kelly and Gibbons, both avid gamers, were inspired to make Final Deployment over an Indian buffet dinner while talking about video games. While the two rely on YouTube walkthroughs for their own gaming pursuits, it was through their own children that they discovered there’s an audience of people who watch streamers just for fun, regardless of the game.

“I remember our daughter watched one with a young woman who, part of the fun, was not knowing how to play the game,” says Casper. “Nick and I genuinely watch them when we need help. But the trend now is to watch them for entertainment even for games you don’t play, which our kids do.”

Final Deployment 4, Casper and Kelly say, “comments” on streamers’ insatiable pursuit for an audience, but doesn’t say anything specific. It’s main goal was to be funny.

“So many of these 4 a.m.’s are like, you have an idea that starts and it goes off the rail, that’s how they roll,” Gibbons says.

Of the research they did into streamer culture — there are tiny details in Final Deployment that show the two have done their homework — Gibbons says they “didn’t watch enough of them” but watched “several different ones” to figure out archetypes. “

“We didn’t subject ourselves to hours of these guys,” Kelly says, “which probably helped to keep our sanity level.”