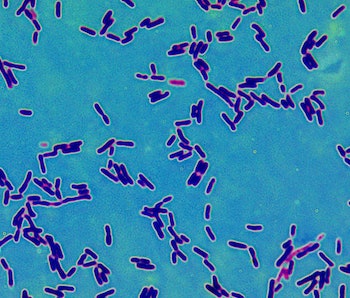 Scientists have discovered that hundreds of bacterial species are capable of producing electricity and could very well be co-opted to create “living batteries.”

While researchers have known that bacteria found in exotic environments like the ocean floor are electrogenic, a new study published in the journal Nature marks the first time scientists have uncovered bacteria interacting with humans are also electrogenic.

These bacteria range from the sort that cause diarrhea to the ones that ferment yogurt. Many fill the human gut, and understanding how these bacteria develop electricity-producing capabilities may reveal how they infect humans — or why they keep us healthy.

Study co-author and University of California, Berkeley postdoctoral fellow Sam Light tells Inverse that over the past 30 years scientists have increasingly realized that bacteria that live in environments rich in mineral oxides, like iron oxide and manganese oxide, are able to survive because of a process called extracellular electron transfer. This means they produce electricity as part of their metabolism, Light says.

The reason why some bacteria generate electricity is similar to why we breathe oxygen: to support energy production. In the human body, electrons are transferred to oxygen molecules in the mitochondria inside every cell. But bacteria living in our gut don’t have access to oxygen, so they have evolved the ability to use alternatives. With extracellular electron transfer, these microbes can “breathe” by moving high energy electrons outside of the cell — in the form of electricity.

“We made the discovery that the foodborne pathogen Listeria monocytogenes has this electricity-producing ability,” Light explains. “We were able to identify the genes that were responsible for this electrical activity, and it turns out that many other bacteria possess these genes, too — meaning that they can also make electricity. Bacteria with these genes include other pathogens that cause diseases, probiotics, and normal members of the microbial community within our gut, as well as bacteria used for food fermentation.”

The team discovered that, when grown in a flask with electrodes, the bacteria created a electrical current measured at 500 microamps. This means that the electricity they can make outside of the body is 100,000 electrons per second per cell.

“I wouldn’t say that they’re making electricity inside our bodies,” Light elaborates. “They’re simply performing respiration outside their cells. In other words, they have a process that, outside our body, can be co-opted to create electricity.”

And that’s is of huge interest to scientists. In June NASA sent up electricity-generating bacteria to the International Space Station to see if the microbes still work the same in space. If they do, their electricity could potentially be used to power mission projects. The U.S. armed forces is also financially supporting electrogenic bacteria studies with the hopes that the bacteria can eventually be used to treat wastewater. In 2017, scientists from the University of California, Santa Barbara also made way toward the creation of a “living battery” with a chemically modified microbial fuel cell.

Because oxygen-less bacteria pass electrons out of their cells walls as a means of survival, if manipulated right they could contribute our survival in intense environments as well.