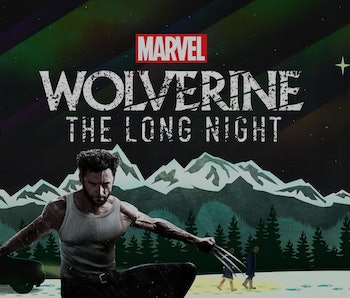 Marvel’s first scripted podcast, Wolverine: The Long Night, delivers a haunting murder mystery set in middle-of-nowhere Alaska — and the first two just became free for anyone to listen on September 12.

The Long Night originally began releasing weekly as a Stitcher Premium exclusive, but now that the show’s migrated over to every mainstream podcast distribution source, everyone can enjoy it. Since the podcast was first announced last December, its writer Benjamin Percy has likened it investigative podcasts like Serial and S-Town, but rather than sticking to real-world events, The Long Night dramatizes a story set in a new Marvel continuity.

“I grew up on Wolverine in the comics and movies, but i feel as though he’s been in the spotlight a little too much,” Percy told Inverse in a May interview ahead of the show’s finale. “It made him … overly familiar.” Try as he might, Hugh Jackman’s version of the character always felt like a good guy with violent tendencies, but the real Wolverine — according to Percy anyway — is something much more frightening. Percy’s goal was to show a darker Logan in The Long Night.

“Logan’s someone who’s done a lot of very bad things,” Percy said. “He’s someone we should be fearful of. I wanted to re-mystify him and regulate him to the shadows.” As such, the voice of Logan actually gets very little airtime on Wolverine: The Long Night. Whenever Richard Armitage does lend his voice for the character, it’s usually in second-hand ways like flashbacks mid-story or someone else reading a letter he wrote.

The Long Night instead follows Special Agents Sally Pierce and Tad Marshall as they investigate a string of grisly deaths in the fictional Burns, Alaska. “I’ve been wanting to write about Alaska,” Percy said about the setting. “It’s a place where rogues and misfits gather. You’ll find survivalists and religious extremists and political zealots — people running away from something. One thing you aren’t allowed to ask is, ‘Why you are here?’” To fit in with Percy’s conceptualization of Alaska, The Long Night includes something of a doomsday cult warning of what they call “The Long Night” (hence the title).

The Aurora Cult, as it’s called, is a reflection of the “boundless promises” that Percy himself saw growing up in Oregan not far from The Summit Lighthouse (the cult featured in Netflix’s *Wild, Wild Country*), to which several of his family members were pledged.

“That was my backyard growing up. They wore all maroon. Mine wear all black. Some of the chanting witnessed growing up, the dreamy arrogance of cult leaders … it’s all there.” His perceptions breathed life into the persona of Nicholas Prophet, the otherworldly leader of the Aurora cult.

These are just a few of the ways that the mysteries of Wolverine: The Long Night deepen over 10 episodes.

Is Logan, with his questionable memory, responsible for ripping people to shreds? Or is there something even more dangerous than him out in the wilderness?

The show operates within its own continuity that should feel familiar to most Marvel fans. There are whispers of the Weapon X program and the general public is aware that mutants exist. There are even plenty of Easter eggs about the wider Marvel universe for fans to catch, and the obligatory superhero post-credits scene teasing an iconic story for Season 2.

The greater promise is that one day soon, we might eventually get a Marvel Podcast Universe that’s as robust and all-encompassing as the Marvel Cinematic Universe. But for now, listen to this excellently scripted mystery thriller.

Episodes 1 and 2 are currently available, with future episodes probably releasing every Wednesday.

Listen to the first episode on Spotify here below, or virtually anywhere you find your free podcasts: