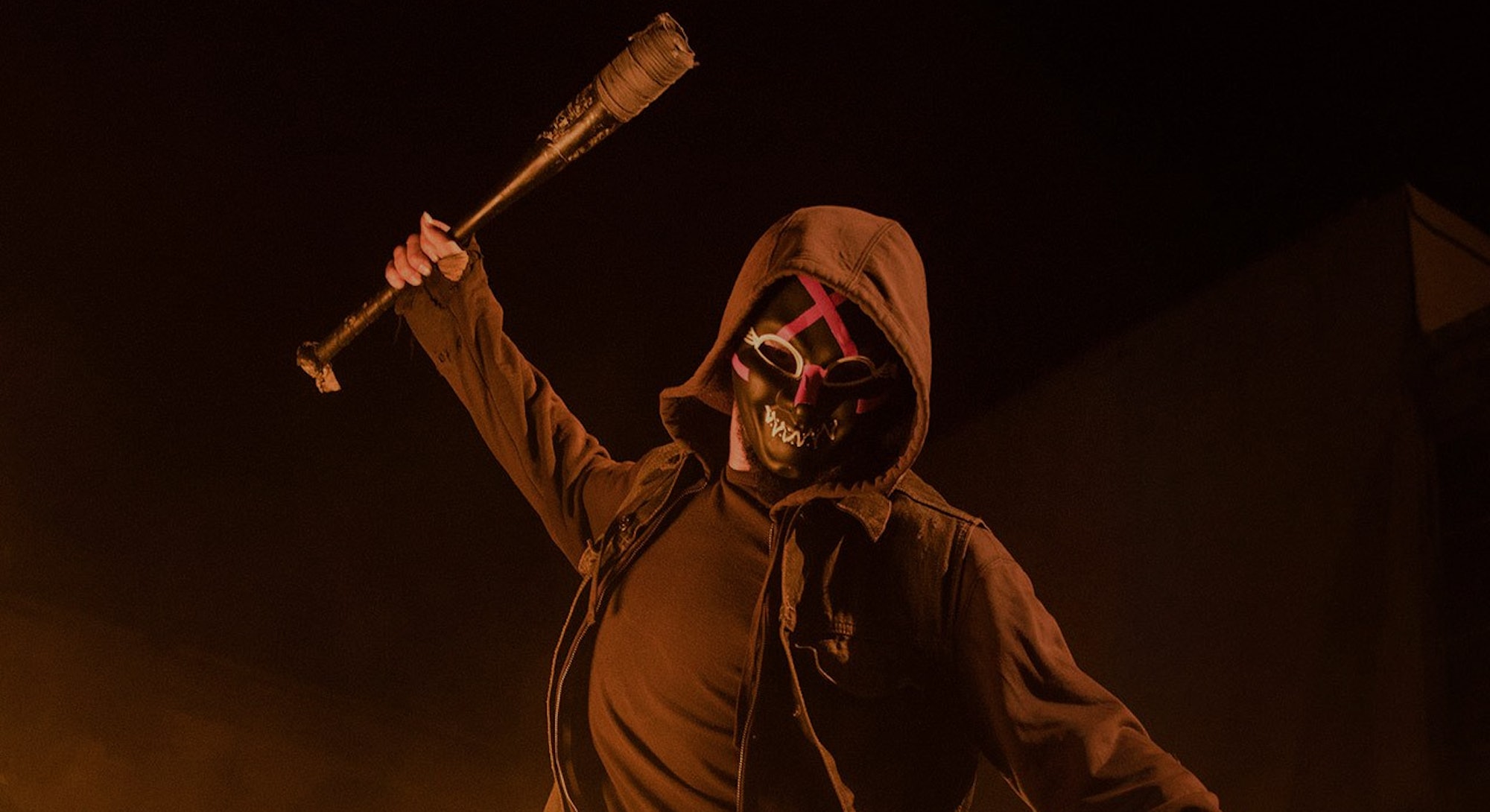 Anyone who still thought the original Purge films were a platform for dumb violence cynically propped up by political commentary was finally proved wrong this summer. By the release of the the fourth film on July 4, audiences knew what they were in for with Purge titles. Since 2013, the wildly popular horror franchise had carved out a niche by crafting an alternative universe that its creators suggest is not unlike our own.

In the movies, the annual Purge is a tool for economic suppression, a means through which the upper echelon of society literally and figuratively purges society of its lower class. Crime goes down because the criminals kill each other, poverty goes down because purgers target the poor who can’t defend themselves, and the overall economy thrives because welfare becomes unnecessary as fewer people consume larger pools of resources. In the face of intense political polarization, 2018 is the perfect year for a Purge TV series, which debuted this month on USA Network and airs on Tuesday nights.

If there’s one welcome difference between The Purge film franchise and The Purge TV show, it’s that the twisted social commentary of the films is dramatized far more effectively than it ever could have been on the big screen, when it was sandwiched between scenes of ultra-violence.

In some ways, the new show feels a lot like Lost in its use of an ensemble cast to tell a series of character-driven stories through flashbacks. The characters may come from a diverse array of socioeconomic backgrounds, but they all share a common thread connected to the economy of this world, says showrunner Thomas Kelly.

“Our characters are stand-ins for different audience viewpoints,” Kelly Inverse during a June set visit in New Orleans, Louisiana.

While there, actress Hannah Anderson, who plays Jenna, one-half of an anti-Purge couple in the series, says the series asks of each character, “How far are you willing to go to survive or to stand up for what you believe in?”

In just about every instance, the answer to that question is tied to class divides each character faces. Some spend their lives in poverty, some have worked themselves up from nothing, some achieved immense success but hit the glass ceiling, and still others suffer as blue-collar workers amidst de-industrialization.

“Through the character’s explorations of the day,” Kelly says, “whether it’s race or class, we define what the reality becomes when a really small percentage of people get a hold of power. How does that affect the way we live our lives?”

“This could happen ten minutes from now, ten yards away”

The Purge TV show takes place in the year 2027, but Kelly wants the audience to feel “like this could happen ten minutes from now, ten yards away.” It’s horrifying to watch a nation Purge itself through government-sanctioned annual murder, but the truth is that socio-economic control from the upper class is already very real.

Here’s how every character’s experiences on The Purge prove that this is a dystopia of economic ruin, rather than purely one of murder and violence.

Spoilers for The Purge ahead.

The story of a soldier coming home to save a troubled sister oozes just the right amount of sentiment for The Purge. When the series begins, Miguel (Gabriel Chavarria) returns home with just a few hours to spare before the alarms blare, and he’s frantically trying to find his sister Penelope (Jessica Garza) after receiving a troubling letter from her. Their story serves as the emotional core of the entire series, and together they represent what’s essentially the main plotline of the entire show.

Episode 1 (“What Is America?”) includes an easy-to-miss line of dialogue that’s crucial to Miguel and Penelope’s backstory: Both of their parents were killed in the very first Purge 10 years earlier. No, we never see them in The First Purge set on Staten Island, but as the television series unfolds, we’ll learn a lot more about the struggles Miguel and Penelope went through growing up as orphans.

Each episode includes flashbacks for one character, and Episode 3 is all about Miguel. We see him and his sister as children (probably around the time their parents are killed), and again not long before the events of the show.

In one flashback, set two years before the main events of the show, we see Miguel get into a fight with Penelope’s abusive boyfriend outside a “flop house.” These cheap boarding houses likely serve as the only homes that many Purge orphans know.

Because of the Purge, Miguel and Penelope grew up destitute and struggling. One of them joined the military and became a Marine, while the other eventually wound up in a cult of Purge worshippers that submit their lives to the practice. The first episode makes a point to show that this Purge cult preys upon the destitute young. Their supposedly “Good” Leader Tavis explains their worship by saying, “We are the scarred, the beaten, the souls irreparably damaged. And it is that shared pain that allows us to understand each other so deeply. Tonight, that suffering ends, my darlings.”

At the end of Episode 1, however, Penelope witnesses the true horror of what’s in store for her, implying that she’ll spend the rest of the series trying to survive.

Ultimately, these siblings are victims of the New Founding Fathers of America. Their parents were Purged from society simply for being members of the lower class, and unless they’re careful, they’ll suffer the same fate.

Amanda Warren’s Jane is a top-level financier at an equity firm, the right hand of her firm’s CEO, David Ryker (William Baldwin). She’s striving toward a promotion but doubts it’ll happen. “She’s a pretty special gem in the crown that he wears,” Warren said of Jane’s relationship to Ryker. “However, things aren’t really reflected on paper as far as title and opportunity. That’s not matching up to the work that she does. There’s an imbalance to the world she lives in and her rewards.”

“She’s a very righteous woman,” Warren noted. So it comes as a surprise in Episode 1 when Jane hires a Purge assassin to murder her boss and destroy the glass ceiling in the process. Warren hopes her character will “resonate with the American workforce, and those globally.”

“People will understand the appreciation she seeks out from her superiors and the perseverance of her character,” she said.

“She sees the Purge as beneficial towards something good,” Warren continued. “She doesn’t necessarily endorse the idea of the law … so she is faced with many moral dilemmas throughout her journey on Purge night.”

Showrunner Thomas Kelly describes Jane as “An African American woman in high finance successful on her own merits but in a system that doesn’t let her thrive where she needs to be.” Which is why she hires the assassin, but before long her morals make her second-guess that decision, so she ventures out into the Purge to stop what she set in motion.

A constant presence in Jane’s mind is her sick mother, whom we meet early in Episode 1. “The contention they may have is with the choices Jane’s made,” Warren said. “Having been a self-made woman in this world and this life — it comes with its disadvantages and its sacrifices. Nonetheless, it’s something Jane remains resilient in and is very proud of.” Jane might be proud of her accomplishments, but she still feels the pressure of her mother wanting something better, something more for her.

“Rick grew up bootstrapping his entire life,” actor Colin Woodell told Inverse. “He grew up with very little in a poor family and lost his mother to cancer at a young age, so he’s been fending for himself his entire life.”

Woodell talks a lot about Rick’s twisted vision of the American Dream: “In his mind, money is the only thing in the world that they’re living in that would give him stability, safety, and the life he’s never had.” This compels him to “climb the social ladder” and “rub shoulders with Purge elitists.”

Rick’s preconceived notions about the American Dream quickly unravel as he realizes that those who achieve it are actually “the worst humans imaginable.” His wife Jenna (played by Hannah Anderson), on the other hand, grew up with a comfortable middle-class background. “Sometimes they have trouble understanding each other,” Anderson admits.

“Having a good heart can do a lot of good for you,” Woodell said, “but it can actually get in the way and really put you in danger, especially on Purge night.”

Whereas Jenna is good-natured and well-intentioned through and through, Rick brings a slightly more cutthroat, business-focused perspective to their dynamic.

Anderson does describe Jenna as someone “pure of heart.” She’s decidedly anti-Purge and totally devoted to charitable causes. “I think she is somewhat naive but she’s also an idealist and she truly wants to help people,” Anderson said. “That’s a pretty beautiful thing, especially in the world of the Purge.”

The issues plaguing their marriage — only exacerbated by Jenna’s pregnancy — have everything to do with their conflicting opinions about how far they’re willing to compromise their morals to achieve their business goals. Woodell says they’re in a stagnant place. In their first scene of the series, they agree they’re essentially making a “deal with the devil” to then use that money to do good.

of course, in an ideal world, Rick’s vision of the American Dream and Jenna’s endeavor to help the “less fortunate” wouldn’t be a nightmare fueled by government-instituted murder.

We see almost nothing of Lee Tergesen’s Joe in “What Is America?” but if there’s any character that truly embodies the economic struggles of The Purge’s fucked-up version of America, it’s Joe.

The wild card of the series, Joe showed up in early trailers as that guy sharpening huge blades and wearing armor. He drives around on Purge night listening to a pro-Purge motivation speaker and interfering with acts of violence. Tergesen describes his character as “superhero-ish,” adding, “He’s feeling big. He’s feeling important.”

There’s “a heroic nature” to Joe, according to showrunner Thomas Kelly. He’s very much so a guy who once believe in an economic system that totally failed him. So rest assured he’s got some pent-up anger to vent on Purge night.

“His arc’s about alienation,” Kelly said, “and what you would do if you were in the system and it failed you.”

“Joe symbolizes the notion that we’re in a country of de-industrialization and we’ve done nothing about it,” Kelly explained, “Whole swaths look like Germany after WWII. People show up to work at factories and gates shut in their face. Half the jobs went to Mexico, and the other half went to robots.”

Joe is a hard-working guy who believes in the system, and who time and again got his re-training money after being laid off only for the whole cycle to restart.

“He becomes very much a true believer of the Purge because he’s a man of the system,” Kelly explained. “He’s trying to do what’s rightfully his. He had two chances at success, and the rug was pulled out from under him.”

This de-industrialization arises from the NFFA elite, who sacrifices American lives in the millions — and jobs in the tens of thousands — all so they can make even more money and throw even more lavish parties.

Each character in The Purge gets to tell their own story, exploring many of the issues plaguing modern-day society from sexist workplaces to the collapse of American manufacturing. Each story is different, but at their core, each story is the same: That the governing upper class would rather wield their power against the poor than give it up by choice.

It’s the same story The Purge franchise has always told. Unfortunately, it’s only getting more relevant with each new chapter.

The Purge airs Tuesdays on USA Network at 10 p.m. Eastern, but fans can also watch online.