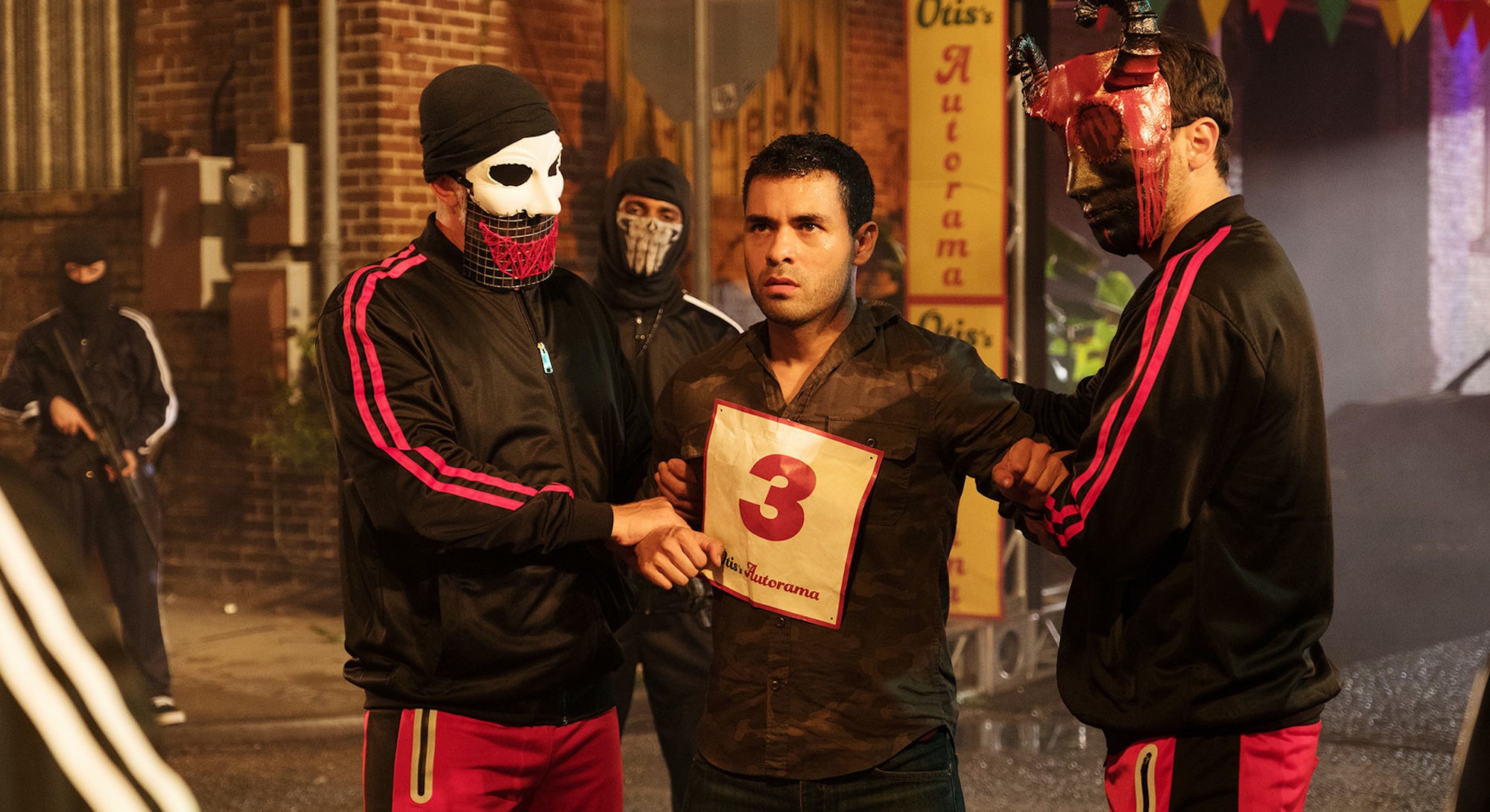 Each of the four Purge movies takes place mostly on a single night when all crime is legal. We almost never learn about the lives of these characters before all the trauma begins, but The Purge TV show is about to change all that.

In June, Inverse visited the set of The Purge in New Orleans, where production had just begun for the fifth episode. In touring the set and interviewing cast and crew, we learned that the new show will reveal a new side to the Purge universe in a narrative style remarkably similar to ABC’s Lost — just with a lot more murder.

Showrunner Thomas Kelly explained to press that flashbacks in The Purge would be used to develop characters in a way we never get to see in the movies. There’ll be tons of violence in the present day, but pertinent flashbacks will show a more thoughtful, emotional side to the Purge universe.

“The movies are — and James would say this — 10 minutes of character and the rest is ‘Will they survive the night?’” Kelly said. “In a 10-hour format, we get to delve into character. We don’t just see our characters on the night of. We get to see what might have led them to make the decisions on the night of.”

10 episodes of television unfold in what’s almost real-time on Purge night, but each episode also focuses on one character’s backstory via flashbacks that explore their motives. And because this is The Purge, its all infused with tons of sociopolitical commentary and implications far beyond regular purging.

“Each episode has flashbacks but we stay specific to one character’s story in those flashbacks,” Kelly explained, estimating that roughly 20 percent of each episode is dedicated to flashbacks. Similar to Lost, The Purge navigates the lives of an ensemble cast by checking in with all its characters in the present day while flashbacks hone in on individual characters in each episode.

“You get to really know these people,” Kelly said. “We want to give the audience a deeper understanding about how these people act under duress during the Purge. What in their past led them to this night and then what in their background will inform their decisions?”

Among the core characters are a soldier trying to protect his sister that’s been taken in by a Purge cult, a businesswoman trying to break the glass ceiling, an ambitious but troubled married couple, the do-good daughter of NFFA founding members, and a blue-collar worker looking to exercise his American rights — just to name a few.

The Purge has diversity among its cast members in marital status, gender, race, age, class, and even political standing. There are characters that want to Purge, some that are morally opposed to killing, and others that will do whatever it takes to achieve their goals — even if it means Purging or paying someone else to do it for them.

Jane (Amanda Warren), for instance, is an ambitious businesswoman so frustrated by the glass ceiling that she hires a Purge assassin to murder her boss. But when Purge night happens, she has second thoughts and sets out to undo what she started.

In a conversation with Inverse, Amanda Warren, who plays Jane, agreed that The Purge’s use of flashbacks compares to shows like Lost. Having worked with Damon Lindelof on The Leftovers, Warren is familiar with his previous work on the flashback-heavy ABC drama.

“The flashbacks are generously distributed,” Warren explained. “And each character has their moments of going back in time so the audience can understand the choices being made and the actions taken on Purge night.” Much like on Lost, individual memories will inform the action of present day, offering an interesting way to develop characters.

Warren called the show “ten hours of really strong beautiful character development” because it “taps into the humanity of each and every character.” She referred to the time spent with characters and added benefits of the flashbacks as a great boon for the series.

“It becomes moments earned for the characters throughout the season, and those are also earned for the audience because they get to ride on that journey. It’s a little less about just the result of the night in general and more about choices that’ve been made and the results, be they consequences, benefits, or rewards.”

Warren describes her character Jane as a “very righteous woman” plagued by “moral dilemmas.” She also hinted that Jane’s flashbacks could detail the relationship Jane has with her mother. “Having become a self-made woman in this world, it comes with its disadvantages and its sacrifices,” Warren explained, speaking about the “contention [Jane’s mother] may have with the choices Jane’s made.”

But every character on The Purge comes with their own flashbacks, backstory, and motives for what they’re doing on Purge night and why they make some of the most brutal decisions of their lives. We’ll just have to wait and see what they are when Purge night comes.

The Purge premieres on September 4 at 10 p.m. Eastern on USA Network.