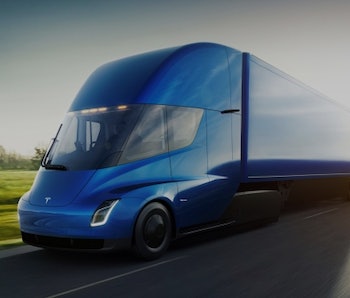 More evidence emerged Thursday that the hissing of diesel-burning eighteen-wheelers on city streets and highways might soon be silenced by Tesla’s all-electric Semi truck. After a flurry of sightings indicating a Tesla Semi prototype was making the rounds, reports emerged that Walmart — the largest retailer in the United States — has ordered another 30 of the vehicles, double the size of the 15 Semis it pre-ordered in 2017. This boosts Walmart’s Tesla Semi fleet to a total of 45 total rigs.

The news was first reported by Electrek’s Fred Lambert. Walmart didn’t respond to a request for comment.

Since its November 2017 unveiling, the Tesla Semi has turned the heads of major buyers across North America and Europe. UPS has reserved 125, PepsiCo will pick up 100, and restaurant supplier Sysco is taking 50. Walmart’s recent move makes it the company with the fourth most Tesla Semis bookings, edging out transportation company J.B. Hunt that has reportedly ordered 40.

“We are always looking for innovative ways to minimize our impact on the environment and lead the industry in the drive for sustainable change,” John Bayliss, senior vice president of logistics of Walmart Canada, told CTV News.

The electric cargo-haulers are slated to enter production in 2019 and will come in two variants, one with a 300-mile range starting at $150,000 and the other with a 500-mile range for $180,000. All the aforementioned companies put down a $20,000 base reservation fee for each of the vehicles they reserved.

The purchase follows a pickup in prototype sightings, most recently in Colorado, at the J.B. Hunt headquarters in Arkansas, and at a UPS facility in Chicago, and on a California highway.

According to the Diesel Technology Forum, more than 95 percent of all large heavy-duty trucks in the United States are diesel-powered. As e-commerce services like Amazon require larger delivery fleets, companies moving toward electric-powered vehicles could put a major dent in the environmental impacts caused by fossil-fuel burning trucks.

Based on what we’ve seen so far, expect more orders from various companies as 2019 rolls around.