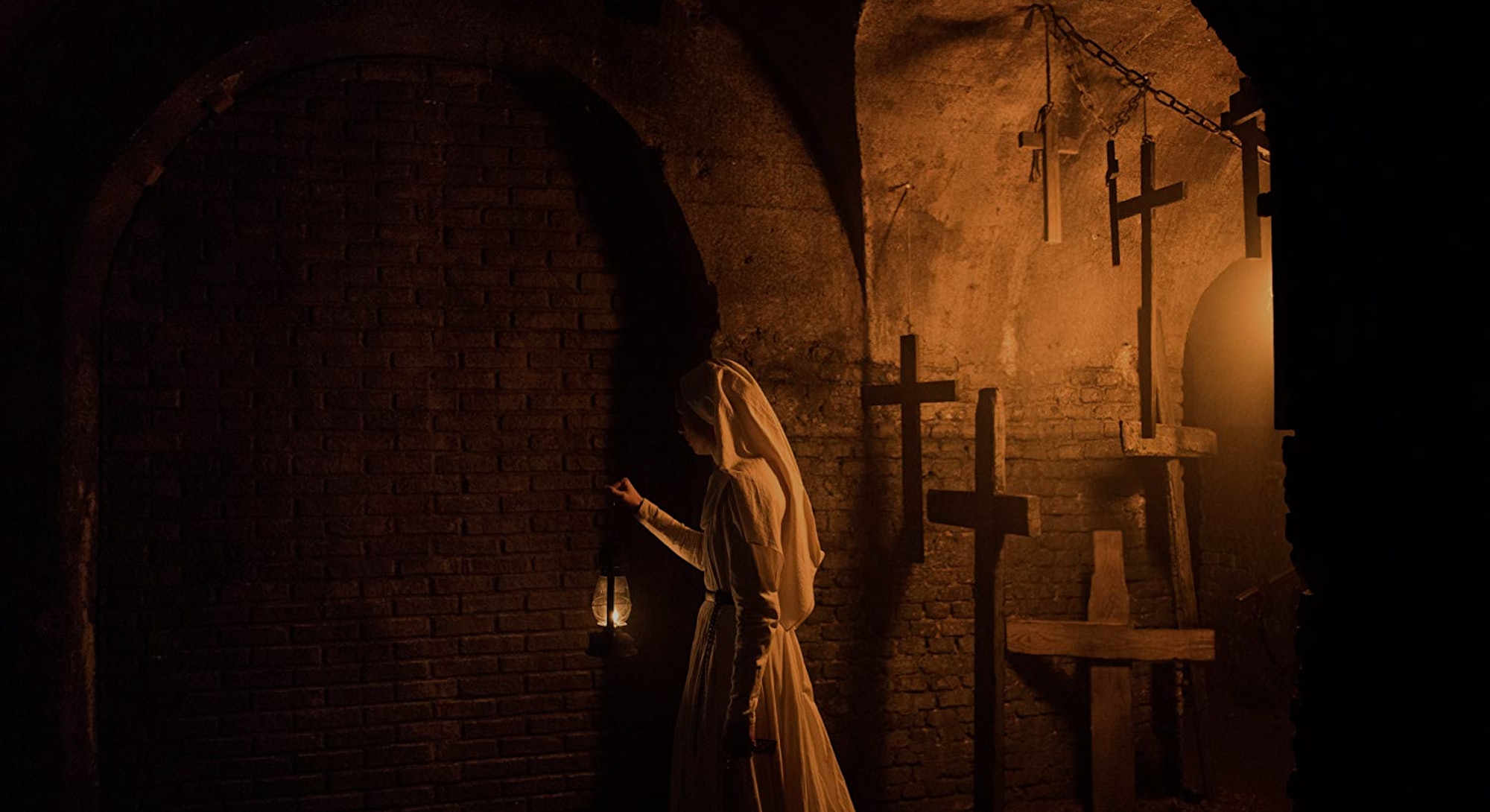 A priest, a nun, and a French guy walk into an abbey… While the premise of The Nun, the latest entry in the quickly-expanding Conjuring Cinematic Universe, might sound like a joke, but it’s actually pretty solid gross-out horror film, even if it’s short on legitimate scares.

Directed by Colin Hardy, a budding British horror director set to reboot The Crow in 2019, The Nun is a fun romp through familiar territory. What starts as a papal investigation into a mysterious suicide at a Romanian abbey quickly turns into a mile-per-minute frightfest. The scenery is delightfully gothic, the acting is fine (with a few particularly well-delivered jokes from Jonas Bloquet as a French-Canadian character literally called “Frenchie”), and the cinematography is standard horror movie stuff: lots of quick cuts with a little too much atmospheric fog.

The Nun’s first few scares work well, especially one scene in which the titular nun slash monster appears out of nowhere, flashes a toothy smile, and disappears as a mirror shatters in response. But by the midway point, the movie is piling on scary moments so rapidly that they stop being, well, scary. There’s no sense of tension to create those truly frightful moments that made the original Conjuring so great. Instead, it’s just a montage of freaky visuals without much substance to thread them all together.

On the plus side, The Nun eagerly leans into the gross-out side of the horror genre. Think Evil Dead or The Re-Animator, but without as much winking at the audience. Undead nuns crunch and creek as they move through rooms of the haunted abbey before falling apart into fleshy little pieces. There’s also an undead boy with a long slimy tongue that wraps around his victim’s throats and a snake that bites someone right in the eyeball.

The film’s setting (both physical and historical) also heightens the spooky experience. The Nun takes place in 1952, shortly after WWII, which also explains the emergence of the demon, loosed from its underground prison by bombs dropped during the war. But after a bit of exposition we arrive in the backwoods of Romania where it might as well be 1752 instead, setting the scene for some fun old-timey scares.

There are no cell phones and no electricity (aside from the occasional crackling radio). Instead we get a crumbling castle, old hallways filled with hanging crosses lit by candlelight, and a graveyard full of ringing bells — a remnant from the Plague when people were so worried they’d be buried alive, they were entombed with bells in case they woke up already deep underground (you can probably guess what’s coming next).

The Nun piles on scary moments so rapidly that they stop being, well, scary.

One area where The Nun falls flat, however, is its superficial depiction of the Catholic Church. Amid a growing series of horrific real-life scandals, the film mostly paints the church as a pure force of good in the battle against evil. There’s no hint at the misdeeds these nuns may have committed on their own, either to each other or to the neighboring town that clearly hates them and spits at any mention of the abbey out of superstition.

One early scene in the Vatican seems to acknowledge that the church is occasionally up to shady business, but it’s quickly clarified that’s not the case here — with the religious firmly on the side of good. At one point, in a flashback, we’re even treated to what looks like an army of well-intentioned Crusaders storming the abbey (at that time a castle) to stop an evil duke from summoning some sort of demon.

The Nun also fails to answer some key plot points, including why Taissa Farmiga’s character (a nun in training) is asked to come along even when she has no clear connection to the events that take place. But at the end of the day, none of that really matters. The plot is secondary to the scary nun floating down the abbey hallways as every cross in the room rotates 180-degrees and lights on fire.

In that sense, The Nun does exactly what it’s supposed to, offering plenty of scares while also filling out the connective tissue in the Conjuring Cinematic Universe and laying the groundwork for even more movies. Whether you’re a fan of the series or not, it’s an enjoyable enough diversion. Just don’t expect anything as scary or as clever as the movie that kicked off the entire franchise.

The Nun creeps into theaters September 6.