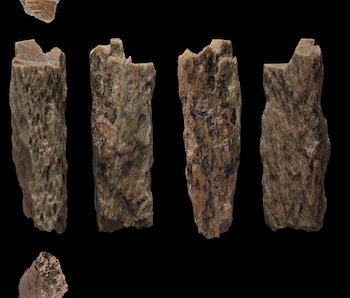 About 90,000 years ago, a young girl lived in the Altai Mountains, a remote range located in what is now Russia. She died when she was only 13 years old, and her bones were piled up in a cave. Those bones revealed she was the child of an unconventional couple: two now-extinct hominins, a Neanderthal and a Denisovan.

As researchers describe in a study published in Nature, the girl, known as Denisova 11, is the first direct evidence that these ancient, distinct hominin species had offspring. Their coupling has been hypothesized before but had never been genetically confirmed until now. All that remained of Denisova 11 was a single bone fragment, found by Russian archeologists at Denisova Cave in 2012. Luckily, a single bone can reveal thousands of years of human history.

See also: NASA Map Shows How Much of America Is on Fire Right Now

Viviane Slon, Ph.D., a post-doctoral researcher at the Max Planck Institute for Evolutionary Anthropology, was the first to analyze the DNA sequences generated from that bone. Realizing that Denisova 11 was a direct offspring of a Neanderthal and a Denisovan, she says, was a complete surprise.

“We knew from previous research that Neanderthals and Denisovans, who were two genetically distinct groups of ancient hominins, occasionally mixed with each other,” Slon tells Inverse. “But to actually find an offspring of such mixing — that was completely unexpected.”

The fragment was identified from among 2,000 bone fragments excavated from the Denisova Cave. With a technique called collagen peptide mass fingerprinting, Slon and her colleagues determined that the bone had a hominin origin, though they didn’t know the species. From the bone’s cortical thickness, they inferred that Denisova 11 was at least 13 years old at the time of her death; six DNA extractions and subsequent genome sequencing revealed her sex. Meanwhile, radiocarbon dating determined the bone was at least 50,000 years old, an estimate that was refined as more data were recovered. Slon says that “from genetic data, we can make a rough estimate of the individual’s age, and we think she lived around 90,000 years ago.”

Comparing her DNA to known gene alleles belonging to Neanderthals, Denisovans, and present-day humans in Africa revealed her unique parentage.

Denisova 11 not only had a Neanderthal mother and a Denisovan father but also an entire family history of species-intermixing. Analyses of her genome revealed that her Denisovan father had at least one Neanderthal ancestor on his family tree, leading the scientists to reason that the two hominin groups not only had many opportunities to meet but also mated more frequently than previously believed. Whether or not this pairing was a result of a moonlit tryst or a forced coupling, however, can’t be determined by genetics.

“We only have DNA sequences from a few ancient homimins, about 20 of them, and to find a half-Neanderthal, half-Denisovan individual among them was a big surprise,” says Slon. “This told us that they had the opportunity to encounter each other and these people must have interacted more frequently that we had previously thought.”

Scientists believe that Neanderthals and Denisovans diverged from a common ancestor more than 390,000 years ago. They inhabited Eurasia until they were replaced by modern humans around 40,000 years ago — and they tended to mate with anatomically modern humans as well. What’s especially curious about Denisova 11’s Neanderthal mother is that she was genetically closer to the Neanderthals who lived in western Europe than she was to those also found in the Denisova cave. This implies that these ancient people frequently migrated for thousands of years before they disappeared; the exact reason for their disappearance is still unknown.

While the scientists have reached the limit of what they can learn from a limited amount of bone powder, that doesn’t meant that Denisova 11 marks the end of what we can learn about ancient hominins like her.

Slon says that, “We are actively looking for other remains, both of Neanderthals and Denisovans, from which DNA could be recovered and from which we could gain more insights about these ancient hominins and the interactions between them.”