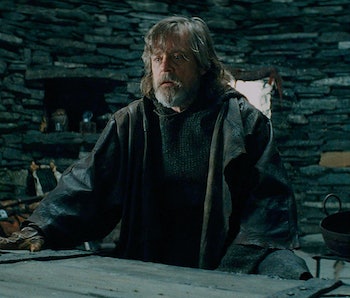 Young Luke Skywalker definitely acted like a virgin in Star Wars: A New Hope, and there’s still no canonical confirmation that he ever did the Bantha with two backs with anybody throughout his long life. But actor Mark Hamill, who’s played Luke for more than 40 years and will reprise the role in Episode IX, seems hopeful that his character didn’t die a virgin.

On Monday, an earnest-seeming Star Wars fan asked Hamill over Twitter about Luke’s love life, saying “Why do you think Luke never found love?? I know that the Knights of REN greatly impacted him but Luke’s a good soul.”

Hamill, who often responds to these types of questions while only sometimes taking them seriously, had the following to say:

Mark Hamill is, of course, talking about the 30-year stretch between Return of the Jedi and The Force Awakens. We can almost take his speculation as confirmation that Luke “never found love” at any point before or during the original trilogy, and because he died at the end of The Last Jedi, his only shot at romance lies during the long stretch between the original and new Star Wars films.

Inverse previously took an exhaustive look at whether or not Luke was a virgin by the time The Last Jedi happens and found that, expanded universe aside, it looks like Luke probably was a lifelong virgin.

Luke declared himself a full-on Jedi by the time Return of the Jedi happened, which means he must’ve followed their teaching of celibacy. He also probably spent years following those same practices. The video game Star Wars: Battlefront II reveals that Luke spent the year immediately after Return of the Jedi hunting down ancient Jedi relics with R2-D2, leading him to Ahch-To. Eventually, in the Darth Vader #10 comic, he even found the list of Force-sensitive people he probably used to recruit students.

Did he find love while off on these solo adventures? Maybe, but we’ve yet to get any confirmation. Eventually, Luke founded his Jedi Acadamy at an ancient Jedi Temple. Unless he hooked up with one of his students, he probably remained celibate while there.

The canonical novel Bloodline confirms that Kylo Ren rebels against Luke and destroys the new Academy less than six years before The Force Awakens. After that, Luke immediately goes into exile on Ahch-To. So unless he’s copulating with an alien creature on that planet, he’s probably still a virgin by the time we see him in The Force Awakens.

Mark Hamill has said in the past that the original Star Wars movies don’t “ever address adult sexuality,” and that remains relatively true for most films in the franchise. He’s even been open to the idea of fans assuming that Luke is gay, because he’s here for the fans.

He even joked in March that Luke Skywalker might’ve teleported to a nudist colony rather than dying at the end of The Last Jedi.

Ultimately, whether or not Luke Skywalker is a virgin, he’s still one of the most badass Jedi warriors to ever live, so at least he’s got that going for him. Maybe dying a virgin isn’t so bad?

We might find out when Mark Hamill returns as Luke Skywalker in some capacity for Star Wars: Episode IX.