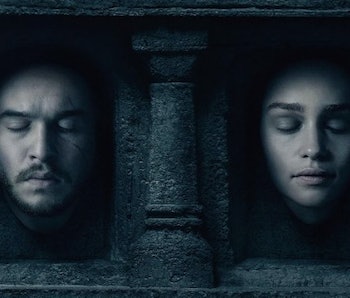 What if the good guys just lose and abandon the continent altogether That’s the gist of the latest Game of Thrones Season 8 theory to emerge from Reddit.

Over on “A Reddit of Ice and Fire,” redditor alacer88 explained a short theory about how the HBO series might conclude. “What if the GoT finale would see everyone leaving Westeros and finding a safe place in Essos, where Daenerys is the only Queen,” the post reads. “We know from the last episodes that the dead and the white walkers cannot swim (except the ones who rescue the dragon from the bottom of the frozen lake for tying the chains).”

In this scenario, the “bittersweet finale” would end with “Cersei opening her blue eyes as the Night Queen” after King’s Landing is overtaken by the army of the dead and she is transformed into a White Walker. The “Champion of Light” — probably Jon Snow — would have to sacrifice himself in some fashion to let everyone else escape to the continent of Essos, where Daenerys is already queen.

This seems totally possible, but it also seems rather weak from a narrative standpoint. Why construct an epic team-up between all the major characters in the end of Season 7 only to have it fail in the end?

Cersei Lannister is bound to die by the end of this story, but considering Game of Thrones creator George R.R. Martin’s love for legends about the prince that was promised, there’s no way we won’t see such a prophesy come true. The Game of Thrones books and show hint towards a much more satisfying conclusion to the series than everyone having to flee Westeros completely because the Night King wipes out all human life.

Also consider that Martin basically worships J.R.R. Tolkien and The Lord of the Rings. Martin might prefer a hard-R rating compared to Tolkien’s PG, but the basic framework of these stories remain the same. Even recently, on PBS’s The Great American Read, Martin explained how Gandalf’s death in The Fellowship of the Ring inspired him to include tons of death in his own stories.

Martin will likely follow Tolkien’s principle of “eucatastrophe” in crafting his epic finale. In Tolkien’s stories, the heroes always come up against impossible odds, but they try — and sometimes die — fighting a fight they can never hope to win. Because of insurmountable odds, the good guys don’t stand a chance of winning. Yet somehow, they pull through in the end.

In this way Tolkien infuses his stories with Christian principles; We’re meant to think they succeed by the grace of god. For Martin, it might be a bit more nihilistic, but the same “good disaster” presented by the eucatastrophe will probably remain.

Before Jon Snow came back from the dead, Game of Thrones had always been oppressively bleak, but since that point in the narrative, the story’s been building towards something much more epic and positive. Jon Snow is our hero, and though he’s entered into a problematic sexual relationship with his aunt that will complicate things moving forward, everything will work out in the end, right?

Are tons more characters going to die in Season 8? Definitely. But will they win in the end and bring peace to the realm so that Jon and/or Dany and/or their child will sit on the Iron Throne? I’m willing to bet on it.

Game of Thrones returns to HBO for its finale season sometime in the first half of 2019.