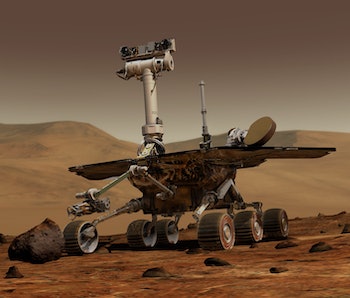 Mars is kind of a bummer: That place is a hotbed of dynamic dust storms that got so big in recent months that they encircled the entire planet. Those conditions, sure to be a challenge for future Mars colonies, are a buzzkill for NASA’s Opportunity Rover right now: A dust storm forced the droid, which has been roaming Mars for 14 years, to shut down in June, and it’s still turned off today.

But NASA hasn’t given up on trying to make contact with its “robot geologist,” which had to undergo an emergency shutdown after the dust storm prevented it from powering itself through its solar panels. Scientists from NASA’s Jet Propulsion Laboratory have been listening for the rover every day since its forced shutdown and attempting to send Opportunity a message command three times a week. So far, it hasn’t sent a beep back.

Mars and Mars technology media relations specialist Andrew Good tells Inverse that there’s no real update about Opportunity at this time. The last time NASA heard from Opportunity was June 10.

“We still haven’t heard from it,” says Good. “A variety of scientists think early to mid-September might be a time when the skies clear enough that it could recharge.”

Gold explains that NASA doesn’t really expect to hear back from the Opportunity until the storm clears up. According to an update from NASA on August 6, that time may come sooner rather than later:

The planet-encircling dust storm on Mars continues to show indicates of decay. Dust-lifting sites have decreased and surface features are starting to emerge. There are indications that the atmospheric opacity might be decreasing over the Opportunity site. Since the last contact with the rover on Sol 5111 (June 10, 2018), Opportunity has likely experienced a low-power fault and perhaps, a mission-clock fault. Additionally, the up-loss timer has also since expired, resulting in another fault condition.

While the storm of tiny dust particles has engulfed Opportunity and suspended its science operations, that doesn’t mean that NASA doesn’t have any eyes on Mars. Its other rover, the selfie-taking Curiosity, continues to study geological formations on the other side of the planet. Curiosity runs on a nuclear-powered battery meaning that, storm or no storm, its mission can go on.