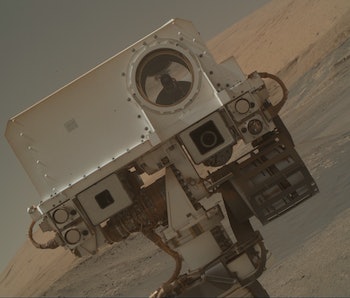 NASA’s Curiosity Rover has been exploring Mars’s surface for the past six years. After a brief hiatus it announced it was back with more sweet pics of the Red Planet with the first Martian selfie ever taken on Monday.

Dozens of raw images that the rover beamed to Earth were uploaded on NASA’s official site for the rover mission. The pictures showed snapshots of the planet’s dusty surface, the martian horizon, and sandy sloping hills. But it also made sure to snap a quick selfie to celebrate the occasion.

Curiosity was launched into space on November 6, 2011, and it touched down on Mars several months later, on August 6, 2012. It is one of the two rovers that are still active on the planet, along with Opportunity.

Curiosity is part of NASA’s Mars Exploration Program, an effort to explore the planet’s surface using spacecraft, landers, and rovers since 1993. This particular rover was sent to the Red Planet to find out if its environment is habitable — or able to support life.

The rover uses some seriously high tech instruments it has built in to analyze soil samples, rocks, and a whole host of other sediment it finds on the planet’s surface. It assess the composition of the samples it finds using an onboard laboratory that can detect if the building blocks of Mars have the chemical composition to support tiny forms of life, called microbes.

Of course, it also acts as a stellar vantage point for astronomers down here on Earth. Curiosity is retrofitted with a ton of cameras to take photographs of the area around it so NASA scientists can get a feel for what it’s like to walks across Mars’ surface. It apparently even has a selfie stick.

Curiosity sends its creators patches of pictures periodically, so stay tuned for the next series of Martian pics and hopefully another selfie.