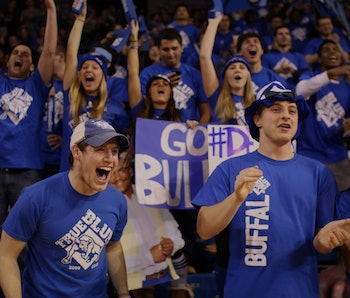 Cliques, teams, and clubs are all reminders of the same thing: Humans like to organize into groups. Sometimes we join deliberately, and other times it just happens subconsciously: Were you rooting for the Golden State Warriors all along, or did you just hop on the bandwagon? Whatever the case, Yale University psychologist Yarrow Dunham, Ph.D., author of a new paper on in-group favoritism, tells Inverse that ultimately what gets us to join isn’t that complicated: We just want to belong.

“A simple way to think about it is that membership boils down to a link between the self and the group, and that makes the group self-relevant and means that the group’s welfare and your welfare are now entangled,” Dunham, whose paper was just published in Trends in Cognitive Science, tells Inverse. “The fact that we tend to be positively predisposed toward ourselves and that we tend to pursue our own self-interest means that once the self is linked to the group, we will also tend to be positively predisposed towards the group and will tend to pursue the group’s interests as well.”

In the new paper, an analysis of past studies on social groups and biases, Dunham explains that in-group favoritism is driven by instinct and not by learned behavior. He calls this the concept of “mere membership.” While complex societal and cultural dynamics may be part of the recipe that makes a group, at the heart of it all is an evolutionarily driven desire to be a part of something. Dunham, an assistant psychology professor at Yale University, writes that people demonstrate persistent favoritism, or an in-group bias, toward groups they’ve been assigned to even though that assignment is the only reason they’re connected.

Dunham analyzed studies that examined a variety of human situations involving social groups and the people excluded from them, finding that people consistently show an in-group bias — that is, they favor people in their own group. They are more likely to forgive their in-group than other people, are better at cooperating with them, and simply just like them more.

That all humans prefer their own group contributes to Dunham’s theory that “mere membership” drives social organization; in other words, we form groups because everyone just wants to belong.

The next step for psychologists is better understanding the psychological mechanisms that drive in-group bias in more “minimal” contexts — that is, figuring out what makes us intuitively feel we belong in a group with certain people, as opposed to feeling connected to them because of a shared sports team or hometown. He thinks it might have something to do with familiarity, which, he writes, “tends to produce liking in and of itself.”

Because favoritism toward people with familiar characteristics — whether it’s a shared language or a well-known face — begins in early childhood and is demonstrated in societies the world over, scientists believe in-group preference has ancient origins. It’s thought that we evolved from small bands of humans who learned to seek out and identify with groups as a means of safety. Cooperation was necessary for survival, and studies have shown that in-group favoritism leads to higher cooperation rates among in-group members compared to out-group members.

Even now, it’s still beneficial to be a part of supportive, cooperative groups. Work friends, religious organizations, and political allies all provide a sense of social identity that can bring meaning to a person’s life. However, in-group preference can also go too far: The dark side of seeking out and forming circles is the emergence of extreme bias for one’s in-group. Differentiating between an “us” and a “them” may have helped ancient people stay safe, but the naturally occurring tendency to prefer people like ourselves can lead to discrimination and prejudice.

“The benefits have to be placed alongside the ills,” says Dunham. “Groups can polarize and lead to all kinds of conflict. Indeed, most conflict and most wars and forms of oppression can be defined as intergroup conflicts.”

Counterintuitively, our propensity for in-group bias may help us overpower its deeply negative side. Dunham points out that divisions between groups can be overpowered by other identifies, like seeing yourself as an American or a citizen of the world. The latter is sometimes referred to as an Independence Day effect: If people root their identity in simply being human, it may overpower their urge to dismiss other humans.

“We can change our habits of mind so that we see others less as members of groups and more as individuals,” says Dunham. “We can engage in positive contact across group lines.”