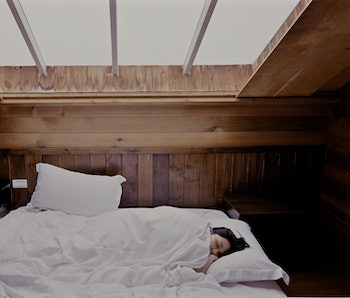 It’s no secret that chronic sleep deprivation is taking its toll on America’s health, but a new study suggests that those who get more than ample sleep aren’t that safe either. Seemingly counterintuitive results reported in the Journal of the American Heart Association on Wednesday suggest that oversleeping might put you at higher risk for certain heart conditions. But don’t go setting 4 AM alarms just yet: As the study’s lead author tells Inverse, oversleeping itself isn’t the problem.

The study, conducted at Keele University, was a systematic review and meta-analysis of 74 existing studies — collectively covering three million patients — that investigated how sleep hours impacted overall health. Lead author and clinical lecturer in cardiology Chun Shing Kwok, Ph.D. and his team noted a link between consistently sleeping more than eight hours and the risk of all-cause mortality (dying of anything) and the risk of cardiovascular conditions. Those who consistently slept for ten hours had a 30 percent increase in their risk of all-cause mortality and a 49 percent increase in the risk of cardiovascular-related death, the team writes.

The findings might seem alarming, but Chung argues that this pattern shouldn’t be blamed on sleeping in.

“Sleep is complex and related to many factors such as lifestyle, occupation, caring needs for children and relatives as well as physical illness,” he adds. “Too much sleep may be related to conditions like obstructive sleep apnea and hypothyroidism.”

Instead, sleeping longer than ten hours might be indicative of other problems that might give cardiologists concern, adds Brooke Aggarwal, Ph.D., a behavioral scientist and clinical health education specialist in the Division of Cardiology at Columbia University Medical Center who was not involved in the study. “Scientists are not totally sure if sleeping too much is a risk to health itself, or if it is simply a marker of increased risk, she tells Inverse.

“I think that longer sleep could be a ‘red flag’ or early marker of an underlying medical issue, which highlights the importance of asking about sleep at physician visits in order to identify individuals who may be at increased risk for cardiovascular disease and mortality,” she adds.

Aggarwal’s own research on sleep and cardiovascular health led to her own recent study showing that adverse health outcomes arise from too little sleep, but she’s particularly interested in Kwok’s finding that poor sleep quality was associated with a 44 percent increase in coronary heart disease risk. This finding, Aggarwal says, highlights that quality of sleep is incredibly important and that the hours you spend asleep don’t mean much if they’re not actually restorative.

“The Kwok et al. paper in JAHA showed that perceived poor sleep quality was associated with increased cardiac risk, which is a very interesting finding and also consistent with our recent findings published in JAHA,” she adds. “Currently, asking about sleep patterns is not a routine part of healthcare encounters.”

This is why in the conclusion of his paper, Kwok and his team argue that sleep quality and hours are important “markers” of cardiovascular health — that is, factors that physicians should consider asking patients about if they don’t already. Monitoring heart health could be as easy as asking a few basic questions, says Aggarwal.

“We feel that perhaps the following two simple questions could be asked at physician visits,” she says. “How much sleep are you getting, on average? And how well are you sleeping?”