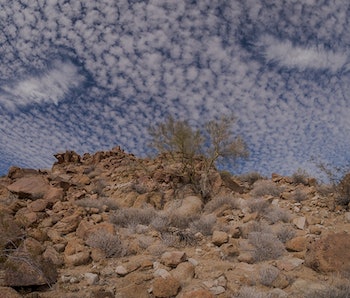 Conspiracy theorists of Brisbane caught a glimpse of the unexplainable on Tuesday morning when a mysterious hole opened up in the cotton-ball clouds blanketing the city. Australian Twitter responded predictably, calling the hole a “portal” for UFOs. There’s no denying that the oblong gap seemed wide enough for aliens to step through, but as atmospheric scientist David A. Kristovich, Ph.D., explains to Inverse, it merely marks the footprint of falling ice.

“These are called ‘cavum’ or ‘hole-punch’ clouds,” explains Kristovich, who heads the Climate and Atmospheric Sciences Section of the Illinois State Water Survey Prairie Research Institute at University of Illinois at Urbana-Champaign. “Cavum are usually circular or oval shaped holes that can sometimes be seen in layers of altocumulus or cirrocumulus cloud.”

Cumulus clouds are the soft, puffy ones that look like the clumps in a favorite fleece sweater; altocumulus and cirrocumulus are subtypes that respectively live in the middle range and high range of the atmosphere. They’re opaque because they’re stuffed with water droplets that don’t quite behave the way you might expect water at that temperature to behave.

“In these conditions, the water droplets are called ‘supercooled’ because they remain liquid even though the temperature is below freezing,” says Kristovich. Understanding that those liquid droplets eventually turn to ice under certain conditions is key to believing that Brisbane’s cloud-holes are not caused by invading UFOs.

We’re all taught that liquid water freezes at 0 °C, but for a number of reasons this is not always the case. To turn to ice, a droplet of water must first “nucleate” — meaning it must have a seed around which to grow the rest of the ice crystal — but sometimes, at cumulus-level temperatures, the nuclei just don’t form. The water remains liquid and “supercooled,” and the cloud stays opaque. But this balance is a precarious one and can change any moment.

A number of factors can rapidly shift in a cloud, sowing the seeds of ice formation. And once ice starts to form, holes in the cloud begin to grow.

“If ice crystals start to form in these clouds of liquid droplets, they grow rapidly and draw water from the liquid drops,” says Kristovich. “As the area of ice crystal formation grows, the cloud droplets evaporate, causing a patch of the cloud layer to ‘disappear’.”

In the photo below, the elongated gash tearing through the sky represents the area where nucleation began and ice crystals started to form. As the translucent mist within the hole suggests, however, it’s not a perfectly cleared gateway to the upper atmosphere.

“The patch where the cloud layer disappeared often looks hazy and might have ‘virga’ – hazy wisps of ice crystals falling toward the earth because of their growth and increasing weight,” says Kristovich.

This may come as disappointing news for alien seekers, but they can take solace in the little mystery that remains surrounding hole-punch clouds. The sudden formation of ice crystals that causes droplets to fall out of an opaque cloud is not entirely understood, and scientists are still trying to figure out what prompts them to form. Some think it could well be flying objects — but not the unidentified kind.

“There has been a lot of interest in the scientific literature on what causes the ice crystals to form in these patches,” says Kristovich. “One way is through the influences of aircraft going through the cloud layers.” He refers to an article published in 2010 in the Bulletin of the American Meteorological Society entitled “Aircraft-Induced Hole Punch and Canal Clouds: Inadvertent Cloud Seeding,” which documented the role of airplanes in causing ice crystals to form — that is, “seeding” — in cumulus clouds.

Previous studies have shown, however, that there are a number of ways that a cloud can be seeded. In fact, we already artificially seed clouds with molecules of silver iodide to force them to rain sooner than they naturally might. Brisbane, for its part, seems to have used a different type of human intervention to seed its clouds, though local UFO enthusiasts may not be convinced.