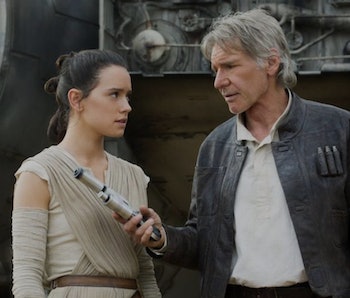 There’s a new fan theory emerging that Rey’s parents will be revealed in Star Wars: Episode IX and that this secret will be both familiar and new, while also undoing a major thematic turn from The Last Jedi.

Slash Film noticed a new fan theory on Monday from YouTube account Film Threat. The narrator, Chris Gore, unpacks this theory as part of a “Franchise Forecast” video, which drops the bombshell early on that Solo: A Star Wars Story was all about Rey’s parents. Meaning that Rey’s parents could be Han Solo and Qi’ra.

Solo demonstrated how devoted Han was to Qi’ra, and it’s possible that sometime after Kylo Ren went off to Luke’s Jedi Academy, Han and Leia’s relationship fell apart. Most of us assume Han resumed his gambling, smuggling ways. But what if he also rejoined Qi’ra and conceived a child, unbeknownst to him?

Here’s the full video that breaks it down even further.

Were this theory true, that would also obviously make Kylo Ren and Rey half-brother and half-sister and further explain why Snoke was able to connect them psychically through the Force. (This echoes similar connections — and awkward romantic tension — between Luke and Leia in the original trilogy.) The Light-side Leia having a Dark-side son with Dark-side Qi’ra having a Light-side daughter also makes some sense for those who require a neat amount of balance in their stories.

Within the Star Wars timeline, Qi’ra would be 45 years old around the time of Rey’s birth, so practically speaking, this whole theory isn’t outside the realm of possibility. By the way, Keri Russell’s only a few years younger than that, and she’s playing an unspecified role in Episode IX that many already assume is Rey’s mother. So what if she’s an aged-up Qi’ra?

We’re descending into the realm of fan fiction here, but what if Han Solo ruined their “family” by abandoning Leia during Ben Solo’s Jedi training? What if that triggered his shift to the Dark side and caused him to hate his father? It would also explain why he’s so dismissive of Rey’s parents during The Last Jedi, especially considering the fact that he’s basically royalty.

“They were filthy junk traders. Sold you off for drinking money,” Kylo Ren says of Rey’s parents in The Last Jedi. “They’re dead in a pauper’s grave in the Jakku desert. You come from nothing. You’re nothing. But not to me.”

Rey’s parents being “nobody” is presented as a truth she sort of just intuits while inside the dark cave on Ahch-To. But much like Luke Skywalker’s vision in Empire Strikes Back on Dagobah, these Force visions expose a person’s greatest fears so as to demonstrate an important lesson. For Luke, that meant realizing that succumbing to fear would lead him to become just like his father.

For Rey, it’s less about her identity and more about relying on herself rather than expecting someone else to guide her. The Last Jedi’s director, Rian Johnson, has said “her greatest fear is [that], in the search for identity, she has nobody but herself to rely on.” She comes to embrace that fear as a truth about herself. Whether or not her parents are nobodies or somebodies, Rey learning to rely on herself is what truly matters.

Within the framework of The Last Jedi as an insulated story, Rey’s parents being junkies serves as a brilliant way to dramatize the importance of self-reliance. So undoing that revelation in some capacity doesn’t necessarily detract from it.

With J. J. Abrams returning for the next Star Wars movie, it’s entirely possible that Episode IX might revisit Rey’s lineage with the same sense of intrigue and mystery that The Force Awakens did. Her Force vision upon touching Luke’s old lightsaber at Maz Kanata’s castle included Obi-Wan Kenobi’s voice, spurring many to theorize she could be a Kenobi. But the way she immediately bonded with Han Solo also made people think she might be his daughter.

Either way, it certainly seems like Rey’s lineage is something that Abrams wants to explore. Simon Pegg, who also worked on The Force Awakens said, “Well I know what J.J. kind of intended, or at least what was sort of being chucked around. I think that’s kind of been undone slightly by [The Last Jedi]. I don’t know … There was some talk about, you know, a kind of relevant lineage for her.”

Whether or not anybody wants to admit it, J. J. Abrams might wind up giving Rey real parents in Episode IX.