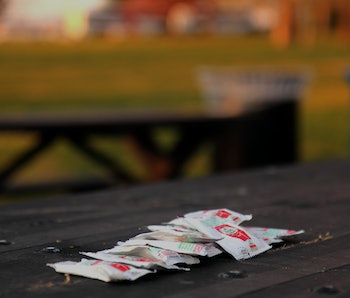 The age of the plastic straw ban has arrived, forcing all of us to get real about our favorite single-use plastics. It is, by all accounts, a good thing. Among those of us re-evaluating our relationship to the greenhouse gas-emitting polymers are scientists at Virginia Tech, who recently turned their attention to another type of easily forgotten plastic junk capable of creating mountains of waste: ketchup packets.

Everyone knows how difficult it is to get every last bit of ketchup out of a packet, including the people who make them. That’s why packets are often bigger than they need to be: If manufacturers know that only, say, 70 percent of the ketchup will make it onto your burger, they’ll make the packet bigger and pump more in, just so you end up with the right amount. The end result is a satisfactorily ketchupped burger, along with unnecessarily large packets and the 30 percent of the red stuff that was never meant to make it out. This inefficient process is what study co-authors meant to streamline in their new study, published in Scientific Reports.

In the paper, co-authors Jonathan Boreyko, Ph.D., an assistant professor of biomedical engineering and mechanics, and Ranit Mukherjee, a doctoral student in the Department of Biomedical Engineering and Mechanics, describe a new method to make plastics more slippery — and therefore more more efficient at expelling all their contents. Funded by food packaging company Bemis, the team says that by making packaging more slippery, they can ensure that consumers get the most out of each packet, reducing the need to make unnecessarily large ones.

“You could keep the plastic the same size and not waste so much food,” Boreyko tells Inverse. “But you could also make the packets smaller since you know you’re getting more out of it, and that would reduce the plastic footprint.”

Polyethylene, a notorious plastic film, is the most commonly used plastic in the world and is often used in making ketchup packets. One of its generally accepted properties is that it’s completely liquid resistant, which is great if you’re trying to use it to design a waterproof bag, but less so if you’re trying to design a packet meant to expel its contents, says Boreyko: Counterintuitively, polyethylene-lined plastics are actually kind of sticky. Things like ketchup packets made from this substance need to have some kind of lubricant wicked into their structure — usually a type of oil that helps the sticky contents slide right out. The problem is, polyethylene doesn’t get along well with oil.

“There was a general consensus that polyethylene was impermeable to liquid. Everyone thought that it was impossible to get a lubricating oil into it,” Boreyko says. “Our main breakthrough was that if the oil is compatible enough, it can manage to wick in very very slowly.”

For years, startups have been trying to find a way to embed these oil lubricants into plastic packaging by making the surfaces of the plastic rougher. This is usually accomplished by blasting the surfaces with lots of nanoparticles in order to give the oil something to stick to — the same way you might use sandpaper to roughen up a piece of furniture before you paint it.

But Boreyko and Mukherjee found that if you choose the right oil, the costly nanoparticle sprays become unnecessary. In particular, they found that a thin layer of cottonseed oil is capable of seeping deep into plastics, creating a thin, natural lubricant that uses less oil to achieve more slipperiness.

“Why that’s so much better is that when it’s soaked into the wicking you only have this small volume of oil actually present, so you can get a durable slippery layer without hardly having to use any oil at all,” Boryeko adds.

It may seem like a small breakthrough, but, like the plastic straw ban, it has the potential to make a big impact on the global plastics issue. Since the Heinz Ketchup company reportedly produces around 11.5 billion ketchup packets per year, maybe decreasing their size and increasing their efficiency will hold us over until we finally achieve the plastic-free dream.