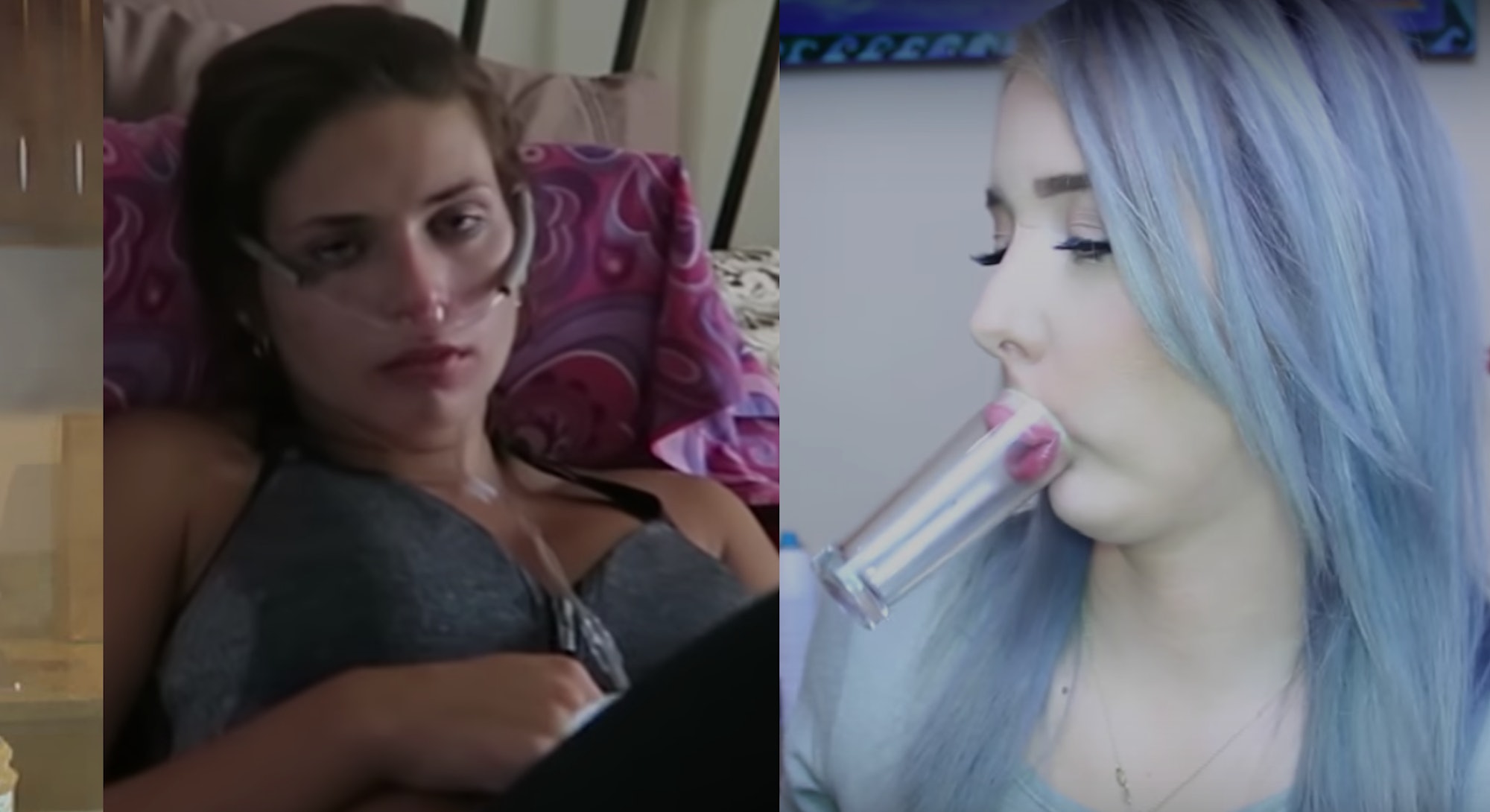 The “Keke”/“Kiki”/“In My Feelings”/Shiggy challenge of weeks past has produced some great celebrity footage and horrific car accidents, along with thousands of other versions of the challenge meme. But an 18-year-old in Iowa who fractured her skull is warning other not to jump out a moving car while filming yourself dancing to the latest Drake hit. And you think that’d be obvious. But challenge memes have always relied on absurdity and escalating risk to remain relevant, and the “In My Feelings” challenge is no different.

We can add the #DoTheShiggy hashtag to the scores of other dumb memes that have gotten kids killed, injured, or landed them in excruciating pain. Some also provide viral hilarity, but is it worth it? Meme at your own risk.

For some reason, a lot of disastrous meme challenges involve eating, drinking, and snorting things. And we’re not just talking about when middle schoolers crush up Smarties and exhale powdered sugar like vape smoke. People put all kinds of nasty shit in their body for laughs, but oftentimes, the joke is on them.

This challenge has floated around the internet for at least two years, and comes and goes in phases. There are two iterations, and both are inconceivably stupid: in one, a victim gets a bucket of boiling hot water poured or thrown at them, sometimes while they’re asleep — in the other, the participant tries to drink as much boiling water as they can through a straw.

As you can imagine, it never ends well. Just weeks ago, a 15-year-old in Indiana ended up with severe burns after a friend tried the nighttime surprise version of the challenge at a sleepover. Last year, an 8-year-old girl died after trying the straw method, and an 11-year-old girl received burns on 85 percent of her body the same month.

YouTuber GloZell Green’s Cinnamon Challenge video is legendary, with over 54,000,000 views. Her outlandish reaction to engulfing a scoop of the spice is hilarious and inspired hundreds of imitators. But inhaling powered tree bark is also really bad for your lungs because the cellulose sticks to the inside of your throat and chest cavity, causing asthma attacks and violently painful reactions. Stick to Cinnamon Toast Crunch, instead.

This infamous late-2017 fad was less of a phenomenon and more of an excuse for outlets to write about how Generation Z is ruining this country with its stupidity — that being said, some people definitely tasted the forbidden Gushers. Children have died from eating Tide Pods, what with their highly concentrated detergent insides and enticing colorful, squishy exteriors. But teenagers also fried them up, chewed on them, and in some cases swallowed them for internet points. Don’t do that. You can aspirate on the liquid once it reaches your lungs, or by digesting the chemicals you can experience loss of consciousness, change in blood pressure and heart rate, and death.

There are two versions of this challenge that populate YouTube, Vine (rip), and other social media feeds. In one, a condom is filled like a water balloon and dropped on someone else’s head. The latex envelops their entire face and neck for a delightfully absurd slo-mo montage before falling to the ground with a splat. As long as no one suffocates, that one is probably okay. But the other iteration, where people snort a condom up their nose and pull it out of their mouth, should only be attempted by a trained magician. The condom could easily get lodged in the sinuses and cause injury.

Presenting one of the most astonishing challenge videos of all time comes by way of the Hot Pepper Challenge. All it takes is a seriously hot pepper, from ghost to Carolina Reapers (the alleged hottest), and a willing participant. The results can be both hilarious and frighteningly painful. Just watch the footage below to get a taste of the latter. And maybe up your spice tolerance before giving it a go.

This elementary schoolyard game that was the stuff of “don’t do that or my parents will kill me” legend actually did kill at least two kids who competed. The goal is to shove as many marshmallows as you can into your mouth while saying “Chubby Bunny.” It’s simplistic. But it also very easily can lead to choking.

For every light-hearted, even meditative, meme practice like planking, there are a few activities gone viral that are just dangerously stupid. Not to mention, painful.

There are actual professionals who partake in parkour, the art of jumping off of existing structures to complete dangerous, but impressive, stunts. But that’s exactly what parkour is. Stunts. You shouldn’t do it if you’re not properly experienced and willing to face the risks. Because jumping from buildings, roof to roof, and scaling structures without a harness is never not going to be risky. People have died doing it, even those who do parkour professionally. So unless your version of parkour involves a skateboard, a low ramp, and a helmet, stay far away.

• The Salt and Ice Challenge

This one is especially nuts, because the literal goal of the challenge is to burn your skin off. The chemical reaction between table salt and ice lowers the freezing point of water, and soaks up heat from the skin around it, which can cause second- and even third-degree burns if an individual is exposed to the mixture for too long. And that’s the point of the game — who can hold onto the salty ice cubes the longest? Dumb. Dumb! Very dumb!

Long before Kylie Jenner landed on the cover of Forbes, teenagers made fun of her on the internet for her overdrawn lips and eventual lip injections. It all turned out great for Kylie, who rode the publicity train into Kylie Cosmetics and the Lip Kit brand, but people who sucked on shot glasses, cups, and even vacuum hoses to comically inflate their lips ended up with bruising and painful swelling. At least in Jenna Marbles’ version, she’s only pretending to pour acid and burn her lips, ‘cause that does sound like something kids would do these days.

This trend has a more subtle danger than others on this list, but it’s sad and harmful for teen girls nonetheless. All three challenge a young audience to conform to difficult, sometimes impossible beauty standards of thinness. The thigh gap means the person, who is almost always a girl, can stand with her feet together and still have a gap between her thighs. The bikini bridge refers to when a girl wearing a bikini lies on her back and her hipbones raise the hemline of the bikini bottoms slightly above her stomach, creating a “bridge” of sorts. And the A4 paper challenge originated in China, where a woman would hold a piece of A4 paper in front of her stomach to see if it was larger than her waist. All of these ideals emphasize that girls should be as skinny as possible, and that can lead to life-threatening eating disorders, body dysmorphia, and plain old self-consciousness and body image issues.

Similar to the Salt and Ice Challenge, this one is meant to induce pain. Participants grab an eraser and roughly trace letters and words onto their bare skins, and compare the marks left from friction literally rubbing their skin away. As stupid as it is, it kind of seems like something you’d do in middle school, right?

And finally, the Backpack Challenge, in which a person runs between two lines of people chucking backpacks full of stuff at them. It’s the equivalent of being stoned by your friends for a good laugh. Obviously, the backpacks don’t have to be full of materials that could knock you unconsciousness, but who wants to risk that? Especially considering that several backpacks are being thrown at once with at various speeds. It’s not clever. Instead of trying it, watch this unforgettable Vine instead.

Are kids ever going to stop doing stupid crap to make people laugh at their internet fails? Probably not. So let’s just stick a “Don’t Try This At Home” warning over the entire meme-making community and hope for the best.