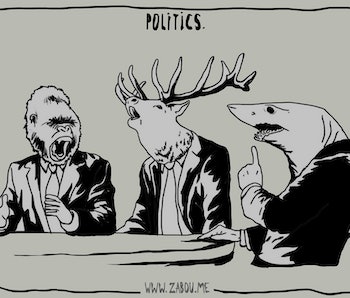 The widening political gulf between conservatives and liberals will be the defining pillar of this era in United States politics. The Pew Research Center has documented this chasm through surveys going back to 1994, but its effects on society are only now coming to light. On Wednesday, a team at University College London released a paper suggesting that it might even be encouraging paranoia.

Defined as the feeling that others are maliciously out to get you, paranoia is associated with some mental illnesses and psychiatric disorders, but occasionally paranoid thoughts are not uncommon in the general population. Study author Nichola Raihani, Ph.D., a professor of evolution and behavior, wanted to investigate whether certain “social threats” or situations caused paranoid tendencies to increase. She turned to some of the most prevalent social threats plaguing society today: perceived differences in political group and social status.

“We wanted to understand why people vary so much in their tendency for paranoid thinking in the general population,” Raihani tells Inverse. “Our study shows experimentally that social threat does indeed prompt paranoid thinking.”

She hypothesized that perceived differences in political group and social status might constitute strong enough “social threats” to make even the most relaxed person question their security. To show this, they distributed online surveys to 2,030 participants, intended to measure baseline levels of paranoia, political affiliation, and social status. On the political affiliation scale, participants were asked to rank themselves between 0 (very liberal) and 100 (very conservative); to gauge social status, participants were asked to judge where on an image of a ten-rung ladder they thought they belonged, in terms of social status.

Then, they played the “Dictator Game.” In this two-player scenario, one player is assigned the role of “dictator” and is given fifty cents. At this point in the game, the dictator is told two key details about the other player: whether they ranked themselves higher or lower than the dictator socially or whether they were a part of the same political group.

The dictator then had to decide whether to send half of the money to the other player or keep it all for himself. Afterward, the players then judged each others actions as “malicious” or “non-malicious” on a sliding scale.

That test unfortunately reflected our worst tendencies in real life. People from different political groups tended to slide that scale further to the right, indicating that they believed that opposite-party “dictator” was out to get them, says Raihani. A similar result appeared when a high-status dictator was matched with a low-status player: the low-status player tended to think that the dictator was more interested in destroying their fortunes than enhancing their own.

“Being alert to social danger is key to our survival, but our results suggest social difference alone encourages us to think that the other person wants to harm us,” Raihani said. Her findings, in short, illuminate that people tend to equate “different” with “malicious.” And unfortunately, the more different we feel we are compared to someone, the more likely we are to feel threatened by them.

From her perspective as an evolutionary biologist, Raihani hypothesizes that this tendency is a leftover from a “long evolutionary history of fierce and sometimes lethal competition that occurs between rival coalitions.” In this view, our tendency to think the worst of one another may stem from the ceaseless struggle to survive in a period when resources were far more limited than they are today.

If this tendency has been baked into our brains over the course of millions of years, we’ll have to work a bit harder to overcome it now that the struggle to survive is not nearly as dire. It will be tough, especially as political differences become more pronounced and parties start to look even more different from one another, but knowing where that tendency stems from in the first place may be the first step in overcoming these evolutionary barriers to cooperation and trust.