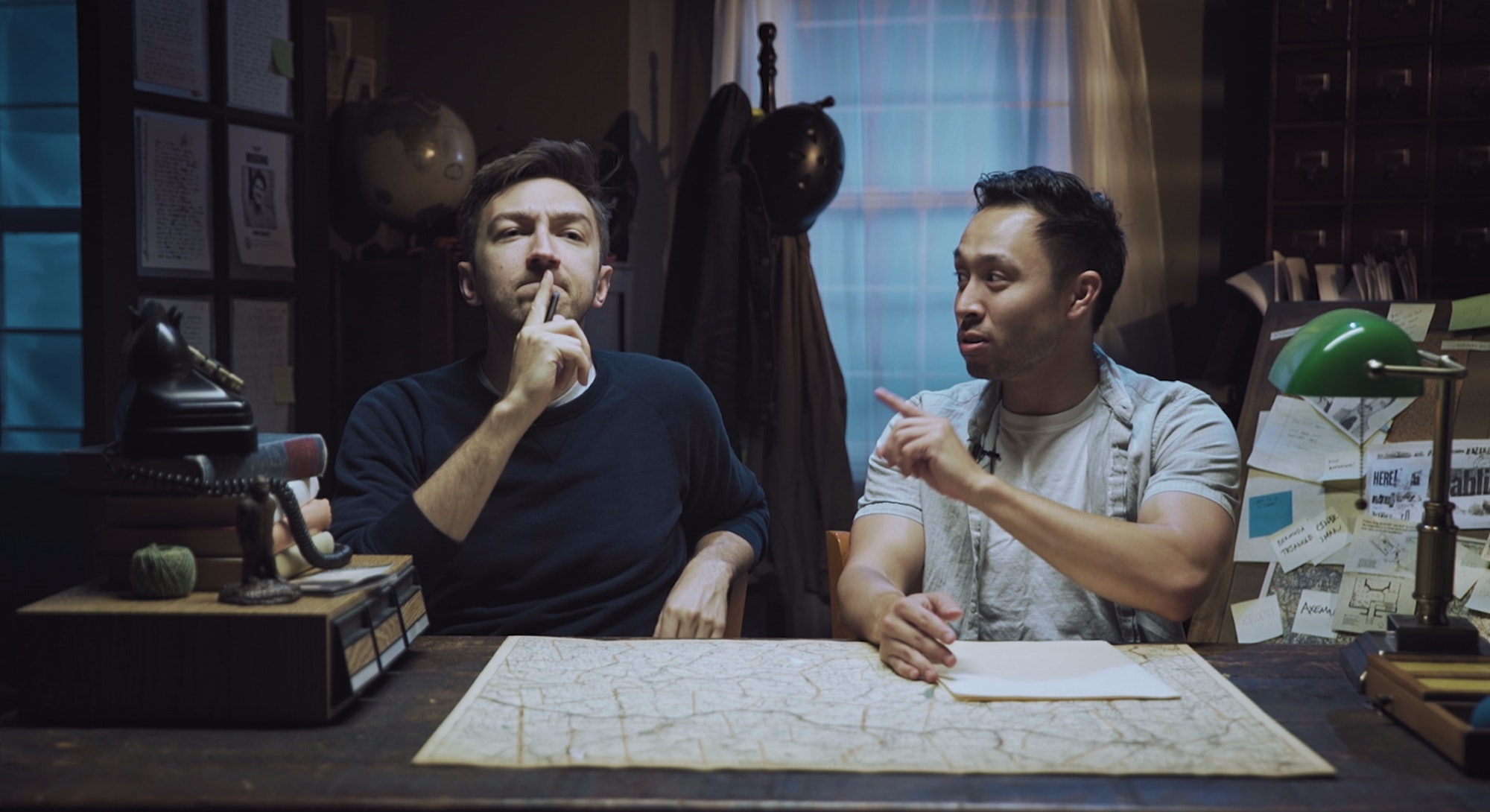 You can define BuzzFeed Unsolved in one viral meme: “Hey there demons,” says Shane Madej, a tall, millennial male with boy next door looks in the basement of a haunted Kentucky bar. “It’s me, ya boy.”

The scene, which has become a widely shared GIF on Tumblr and Twitter, comes from the Season 2 premiere of BuzzFeed Unsolved: Supernatural. Hosted by Madej and Ryan Bergara, the series bucks the spooky tropes of most paranormal and true crime shows on basic cable, which so often go hard in serious speculation, high-tech gadgets, and professional expertise.

Instead, there’s jokes, friendship, and an array of tools like a bouncy ball, a “Spirit Box,” and, in one episode, an Ouija board (yes, really). But the real magic of BuzzFeed’s hit show is its power to appeal to believers and skeptics alike, who come together to laugh with, or at, the pair of charismatic Angelenos. Humor is the real secret weapon against the unknown, and it makes for one of the most popular shows of its kind on the internet.

“I don’t think we would have amassed the fanbase we have if people couldn’t relate to us,” Bergara tells Inverse. “People place themselves by relating to either one of us. Neither of us claim to be experts.”

“I’ll give you this exclusive,” Madej interjects over the phone. “We’re never going to solve anything.”

Two years after airing on the popular BuzzFeed Blue YouTube channel, the informative comedy-horror series spun off into the standalone BuzzFeed Unsolved Network in July; an impressive 760,000 subscribers followed the transition in its first week. The show is also streaming on Amazon Prime and Hulu, a big deal for a series with humble beginnings in BuzzFeed’s ocean of original content.

Unsolved comes in two flavors: BuzzFeed Unsolved: Supernatural, in which the “goofy lads” (Madej’s words) try to find ghosts in real, allegedly haunted locales around the world; and BuzzFeed Unsolved: True Crime, in which Madej and Bergara explore infamous cold cases, from Jack the Ripper to JonBenét Ramsey.

Fans of both, Bergara says, share a common interest in the unknown.

“With ghosts and aliens, people wanna know the truth. That’s the same impulse when it comes to true crime,” he explains. “That’s why the shows work so well as companion pieces.”

Unlike other hosts on TV, the two don’t claim to be experts in theology or criminology. While accreditation in a field usually encourages trust, for BuzzFeed Unsolved, it encourages accessibility.

“Anyone who has watched the show is as adept a ghost hunter as we are,” Madej says. “The Sallie House episode is our first foray into actual ghost hunting. We had no experience at that point. Now, we have a depth of knowledge we may not have had at the beginning.”

The “ghoul boys,” as their fans call them, were film school grads who met as interns at BuzzFeed after stints in public access and corporate video production. The show’s origins are just as normal, originating in Bergara’s carpool rides with BuzzFeed producer Brent Bennett, who shared Bergara’s passion for true crime but disagreed with him in the specifics.

“We had different beliefs, and we would argue all the time,” Bergara recalls. “I thought, wouldn’t it be funny if we just talked about a cold case and filmed it?”

Bergara thought no existing true crime show explored the cases “in the way people would actually talk about it.” Basically, with “the levity of someone talking over lunch.” Thus began BuzzFeed Unsolved, which premiered in February 2016. The pilot featured Bergara and Bennett exploring the Somerton Man, an Australian John Doe case from 1948. It was an immediate hit, and by the third episode, which dove into the 2013 case of Elisa Lam, the show was attracting millions.

“The third episode got 7 million views in a day,” Bergara recalls. “We figured we were onto something.” The spin-off series Supernatural launched shortly after, in April 2016.

Part of the show’s appeal is that, despite it being BuzzFeed, the series was purposefully designed with low-grade graphics to feel like “an insane person’s PowerPoint,” Bergara says.

“I was insistent on doing all the animation and research because I wanted the videos to feel like a crazy person made them. If the graphics got too sleek, people would not relate to it. Over time that dissipated, but I do feel like it retains that spirit. It really is just this ‘guy in the basement.’”

In terms of the show’s look, little has changed since it began. “The production value has gotten better, but it still has its roots in ‘crazy YouTube,’” Madej says.

Before 2016 ended, Madej replaced Bennett when he left to pursue other opportunities. (He still works at BuzzFeed.) But while Bennett usually entertained Bergara’s theories, Madej is skeptical. This would be the final piece of the puzzle that made both shows a hit. Via the two perspectives, viewers can choose to be a “Shaniac” (a sarcastic cynic unafraid to call bullshit) or a “Boogara” (those who can subscribe to Bergara’s outlook that the world is stranger than we know).

“People relate to Shane because he’s a skeptic. He doesn’t believe in ghosts, he’s discerning when it comes to weird details in crimes,” says Bergara, who claims to have seen ghosts. “And I wouldn’t call myself a conspiracy theorist, but I am a little more game.”

Bergara used to be a skeptic, too, until he witnessed some freak toothpaste while visiting the RMS Queen Mary as a teenager. (He returned as an adult when the show featured the British liner in Season 1.) But the host says his belief goes back even further to his Catholic upbringing.

“I wouldn’t say my family was religious, but church instilled the principles of how to be a good human,” he says. “It did instill a fear of evil as much as it did belief in good.” It’s part of the reason why Bergara is only willing to go to do one demonic-themed episode per season.

“My parents were pretty godless,” Madej interjects. “I think [that’s why] I am the way I am. I am afraid of a lot of things in life. Ghosts aren’t one of them.”

“Anyone who has watched the show is as adept a ghost hunter as we are.”

The hosts’ opposing views come to the forefront in Supernatural, when Bergara busts out his tools to Madej’s chagrin. In a change from most TV investigators, Bergara prefers analog, lo-fi tools over fancier toys. “My criteria is, if it can’t convince a skeptic like Shane, it probably is not that good a tool,” he says. “And the only way to [prove it] is to use methods that aren’t going to produce evidence all the time.”

A so-called “Spirit Box,” which uses radio frequencies to produce speech that hunters claim are ghosts communicating, is probably the most hi-tech the show ever gets. It’s also the most effective, as it’s often the source for the show’s most chilling moments.

“Shane hates it,” Bergara says, laughing. “I find it compelling. That’s pretty hard to explain away. Most ghost hunting shows rely on tools because they need something to show; otherwise, people aren’t going to tune in. Our show, people are tuning in for the ghost stuff as they are for the interesting stories, and hearing us bicker with each other.”

Humor is arguably the most distinct element to BuzzFeed Unsolved. Bergara thinks it gives their show a unique identity over competitors. “The humor is a doorway for everybody,” he says. “It is this breather for people to step away from the dark a little bit.”

But Madej, whose perspective can be brutally honest as it is brutally funny, is careful to point out the jokes aren’t making light of the misery that fell upon real people. As they visit abandoned mental institutions, decaying prisons, and the sights of actual grisly murders, Bergara and Madej keep their smart mouths to the peripheral.

“We try to be mindful at not laughing at a horrible thing,” Madej says. “We keep it about stuff that is so bafflingly incompetent that led to this mystery being unsolved, which is usually the case.”

After four seasons per show and counting, the ghoul boys aren’t slowing down. (But don’t expect them to make any house calls.) Neither will the ongoing success of the series change all that much. They’re still going to be two friends entering creepy places, throwing rubber balls down dark hallways, egging on demons, and poring over evidence like a pair of obsessive nuts.

Maybe they’ll get some new tools. Bergara admits he’s playing with the idea of getting a high-tech camera that can read the skeletal outlines of a human body. “So if you point that down a hallway, it may pick up the skeleton of a ghost,” he says.

“That sounds interesting and we should get that,” Madej adds. “Sounds fun. Sounds funny.”