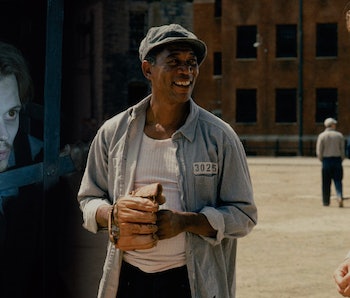 Hulu’s Castle Rock takes all of Stephen King’s horror sensibilities and blends them to create a brand-new story, one set in the titular fictional town that’s been the home of some many of his terrifying stories. References to King’s bibliography abound, but the biggest one has to be Shawshank State Prison from the novella Rita Heyworth and the Shawshank Redemption and its beloved film adaptation. However, it’s not quite the same prison, as the showrunners explained to Inverse.

The Shawshank Prison portrayals in the novella and movie aren’t explicitly in Castle Rock, Maine, although the narrator in both implies that’s where he’s from. In Castle Rock, though, the Prison is clearly within the town’s borders, and it’s implied that the events of Redemption have already occurred decades before (there’s a reference to a bullet hole in the wall from where Warden Norton shot himself in the series’ first episode). The series is set in the present day, after Shawshank’s outgoing warden commits suicide and prison employees find a nameless, almost totally silent young man (Bill Skarsgård) locked in a cage. His identity — and his inexplicable incarceration in the bowels of Shawshank — are what get the story started.

In a phone conversation with Inverse, showrunner Sam Shaw revealed why he and co-showrunner Dustin Thomason chose to make Shawshank so integral to show and the fictional town.

“We wanted to look at a small town that has had terrible things happen in it and to it. Not only supernatural things but also natural things, the fleeing of industry, the closing down of a mill, the feelings of abandonment and emptiness,” Shaw said. “What we thought Castle Rock might look like now was a sign of the death of the American small town.”

In Hulu’s series, the shadow of Shawshank State Prison looms large over all of Castle Rock. This version of Castle Rock is so tied to the prison that the showrunners made a major change to the Shawshank that most audiences are familiar, the towering ornate prison from 1994’s The Shawshank Redemption.

“Part of the reason we chose the prison that we chose to shoot at was we loved the idea that there are houses literally in the shadow of the prison. It’s pretty different from the amazing prison in Ohio that they shot for the movie, which stands alone,” Shaw explained, referring to the historic Ohio State Reformatory where the movie was filmed.

“We really wanted to feel as if Shawshank was part of the town, and to feel the weight of a town that is essentially a company town, but where the business is incarceration,” he continued.

The Shawshank of the original novella and beloved movie adaptation was a pretty terrible place, even though the aesthetic was nicer. Prison by its very nature is terrible, and over the course of the story, inmates are raped, killed, and beaten by prison guards. In addition, the warden is horribly corrupt. However, the 1940s through 1960s setting of The Shawshank Redemption occurred before the prison-industrial complex really kicked into high gear, so it had that going for it.

Also, the Shawshank of the book and movie didn’t have a nameless prisoner locked in a dungeon who may or may not be some sort of Satan.

The first three episodes of Castle Rock debut on July 25, with subsequent episodes coming out every Wednesday on Hulu.

More like this
Entertainment
6.30.2022 1:00 PM
'Strange New Worlds' writer explains that horrifying 'Alien'-inspired Star Trek canon change
By Ryan Britt
Entertainment
21 hours ago
Marvel’s most mysterious Phase 4 trends is setting the MCU up to fail
By Dais Johnston
Entertainment
18 hours ago
How Marcel the Shell invented "never been done before” stop-motion
By Eric Francisco
Share: