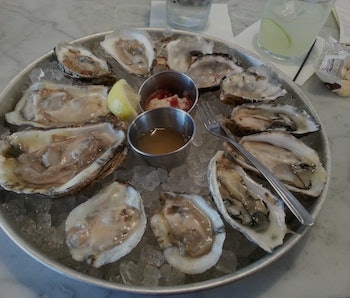 Summer is the perfect time of year to enjoy some fresh seafood by the water — unless you let an old seafood rule spoil your fun. While you’re slurping your oyster shooters, you may recall a little bit of wisdom that someone (maybe your mom?) once told you: Only eat oysters during months that have an “R” in them. You may have even heard a variation of this rule that includes all seafood, not just oysters. And if you’re sweating those crab rolls you recently scarfed down — especially if you just read about the vibriosis outbreak linked to crab meat — don’t worry: When it comes to figuring out whether you’re safe eating seafood, Inverse has you covered.

The short answer is that you’re probably fine. The US Centers for Disease Control and Prevention reports that about 52,000 people in the US contract vibriosis from contaminated food each year, a relatively small number as far as food poisoning cases go. Caused by various species of Vibrio bacteria, vibriosis usually resolves after a few days of diarrhea and abdominal cramping. In rare cases, people infected by the life-threatening Vibrio vulnificus will require urgent treatment and possibly limb amputation. But that particular bacterium only infects about 200 people in the US each year. Salmonella, by comparison, infects over a million people in the US each year.

The longer answer is that it’s complicated.

Most people seem to agree that the original source for the “oyster rule” is a cookbook that was published in 1599. In the “Oyster” section of this cookbook, entitled Dyets Dry Dinner, Englishman Henry Buttes fatefully wrote the following:

in those Mo∣neths that haue the letter R. in their names.

Back in Buttes’ day, the rationale behind this rule was pretty solid: In the northern hemisphere, months with the letter “R” in them — September through April — have cooler weather, so oysters won’t spoil as easily once you harvest them. A little less obviously, summer months provide a much more suitable environment for bacteria — like Vibrio species — and red tide algae that can contaminate oysters and other seafood. Additionally, greater levels of rainfall in the summer decrease the salinity of the saltwater where oysters live, making bacteria grow more readily. And even though fishery management and food storage have improved a whole lot in the 400 years since Buttes wrote his cookbook, his basic premise is still correct.

“Eighty percent of Vibrio infections occur between May and October when water temperatures are warmer — but they can happen any month of the year,” a CDC spokesperson tells Inverse. This lends some credence to the “R” rule. But it’s still a pretty small number of infections, meaning that even though vibriosis is more common in the summer, it’s still a pretty uncommon illness.

A surefire way to kill off any bacteria is to thoroughly cook your oysters. Here’s the CDC’s somewhat snarky reminder:

Modern guidelines for oyster harvesting and shipping also help prevent the likelihood of vibriosis. Even though there’s a small amount of Vibrio bacteria in most oysters, the quantities are too small to make most healthy people sick. After harvest, the major risk factor is that the bacteria multiply rapidly, so oysters that aren’t handled well can quickly become Vibrio bombs. Fortunately, it’s common practice to immediately pack oysters in ice, preventing the bacteria from multiplying. In short, any reputable oyster supplier will be selling you oysters that are most likely safe to eat.

Because of the presence of small amounts of Vibrio bacteria, though, some people should definitely avoid raw oysters. This group includes people with immune system deficiencies and people who take stomach acid reducers.

So if you’re really worried about getting sick from shellfish, either avoid eating raw oysters during the summer or try to stick to fried or steamed oysters. Personally, I’m happy to risk it. To heck with Henry Buttes.

More like this
Science
6.23.2022 11:00 AM
Historic Yellowstone flooding and more: Understand the world through 8 images
By Robin Bea
Science
6.28.2022 10:00 AM
How are drugs absorbed in the body? The science of medicine, explained
By Tom Anchordoquy and The Conversation
Science
6.26.2022 11:00 PM
The powerhouse of the cell has a more complicated origin than we thought
By Viviane Callier and Knowable Magazine
Related Tags
Share: