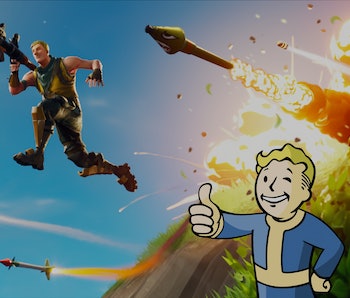 War never changes in the Fallout universe, but that was before Bethesda announced Fallout 76. After years of rumors, the company shocked fans when it revealed an online-only multiplayer title, but a recent interview with Bethesda’s Todd Howard suggests that it won’t be much different from the previous games.

When Fallout 76 was described early on as a “softcore survival” game with player-vs-player combat, it inevitably drew comparisons to battle royale titles like Fortnite. Someone even made a Fallout 4 mod parodying the premise of Fallout 76 by portraying the upcoming title as a tryhard griefing simulator with no NPCs and “players” with names like L33T PWNZ BOSS spawning in to shoot your face and nuke your settlement.

But rumors about the demise of Fallout’s traditional features have been greatly exaggerated. While it’s true that the only humans you’ll encounter after leaving Vault 76 will be fellow players, that doesn’t mean there won’t be any NPCs. Expect to meet robots and intelligent ghouls roaming out in West Virginia. Moreover, Howard has walked back his previous description of Fallout 76 as a softcore survival game, clarifying that it’s more akin to the survival mode in Fallout 4 than any true survival game.

“We avoid the word ‘survival’, because people’s minds immediately go to DayZ and Rust and certain other games, and those comparisons are not really accurate for what we’re doing,” Howard told The Guardian.

He goes on to explain that multiplayer was added to increase the probability of emergent moments. If you’re scavenging around a church chapel and encounter a feral ghoul, you know it’s going to attack you. However, if you bump into another player looting the same stuff you are, well, that can go a lot of different ways. You could end up fighting, squadding up, or even just chatting about how your day is going. You can’t script human behavior.

Despite all this, Howard also revealed that he usually chooses to play the new game alone.

“*Although it’s an online game, when I play it, I mostly still play it solo,” he says. “We like those experiences as much as our fans do.”

That seems like an awfully lonely way to play the game since it essentially makes you the only human left in West Virginia, but I guess there’s something to be said for enjoying the beauty of the state all to yourself. Besides, if you ever get a pining for a battle buddy or a target, the option to plug into an active server is still always there.

More like this
Gaming
Feb. 4, 2023
PS5 owners shouldn’t sleep on Fallout 4
By Mo Mozuch
Gaming
Jan. 31, 2023
Everything We Know About Fortnite's Dragon Ball Super Crossover
By Joseph Yaden
Gaming
Jan. 24, 2023
Fortnite is about to get a Wild Dreams concert from The Kid LAROI
By Jess Reyes
LEARN SOMETHING NEW EVERY DAY.
Related Tags
Share: