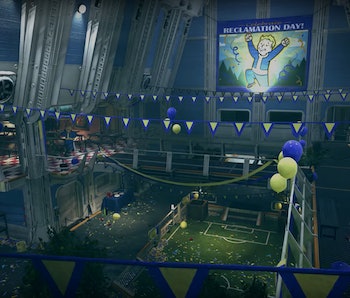 After streaming a bobblehead for nine hours to over 140,000 rabid viewers on Twitch, a new Fallout game has finally been confirmed. Fallout: 76 has sent fans into a theorizing frenzy, combing through the cryptic trailer for details on when and where it may take place. However, the emergence of old rumors and statements from prominent game journalists may indicate that Fallout 76 will not be the single-player RPG that many fans expect.

Fallout 76 might be an online game focused on base-building

It began on Reddit. Hours before Fallout 76 was officially announced, a Redditor by the name of SoMeh claimed that the upcoming game would be called Fallout: Vault 76 and focus heavily on the base-building mechanic that was introduced in Fallout 4. Brian Crecente, video game editor at Variety, later corroborated these rumors.

The next big development came from Jason Schreier, news editor at Kotaku, who said that the upcoming game will not be a single-player RPG, according to his sources.

That’s when redditors began unearthing some older posts, including one eerily prescient comment from 4chan. In December 2017, an anonymous user referred to Fallout 76 by name and claimed it would be a Rust-type shooter. Rust is a first-person survival game where players must use rudimentary tools to gather resources and craft weapons to defend themselves against hostile players.

If the rumors have merit, then it looks like Fallout 76 could be a multiplayer first-person shooter with survival elements and base-building. Those elements also imply that the game will feature some sort of crafting system, gathering mechanics, and player-vs-player combat.

This could mark another radical change for the series series, which has been known as an immersive first-person shooter ever since Fallout 3 was released in 2008. Before that, Fallout and Fallout 2 were isometric turn-based RPGs.

Not everyone is happy about these rumors, but a survival shooter is certainly not out of character for a franchise like Fallout. The player characters of Fallout are typically loners who are abandoned or cast out into the wasteland to fend for themselves. Regarding the base-building, different factions seeking to rebuild the broken world in the way they each see fit has long been a hallmark of the series.

But how credible are these Fallout 76 rumors?

Honestly? Pretty damn credible. I was at least in the ballpark when I suggested the upcoming Fallout would have multiplayer, and Schreier’s latest report seems to verify all the rumors that have come before the announcement. The Fallout 76 trailer, though short, was filled with details that seem to support the claim that this is a game about building a new civilization in the wastes.

We’ve learned that Vault 76, the namesake of the game, was completed in 2077, which is the 300th anniversary of the United States. It was also one of the few “control” vaults. Unlike most vaults, which were built for the secret purpose of performing science experiments upon their unwitting inhabitants, control vaults had no malicious intent. They existed to protect citizens and preserve American lives as advertised. One such vault was Vault 8, which operated without a hitch and became the heart of a thriving, advanced community called Vault City.

The Vault 76 dweller’s Pip-Boy display shows the date October 27, 2102, which is presumably when Vault 76 gives the all clear and opens its door to the outside world. That’s 25 years after The Great War between the United States, China, and the Soviet Union ends in a global nuclear holocaust. From the president’s televised speech and the poster declaring RECLAMATION, we can also infer that Vault 76’s mission is to restart civilization in the wasteland. As my colleague Corey pointed out, that could mean Fallout 76 is the earliest game in the timeline.

It’s also an ideal era for a Fallout game focused on survival and rebuilding in a barren, lawless wasteland with a potential villain in the form of Richard Grey. Grey is the ultimate villain in the first Fallout game who began his horrific transformation into The Master in the year 2102.

In light of all this, the rumored mechanics of Fallout 76 make sense. By God, it looks like we really could be getting a Fallout version of Rust.

I’m one of the few players who despised the settlement mechanic introduced in Fallout 4, but if I can raze towns built by other players and harass them while they’re gathering resources, count me in. Introducing playable factions who can go to war with each other and conquer land would be incredible.