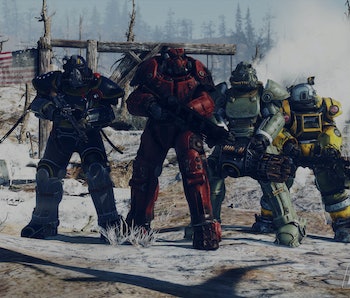 One of the biggest changes to the Fallout series coming to Fallout 76 (aside from the online multiplayer) is nukes. Players will be able to collect codes and infiltrate nuclear silos throughout West Virginia and use the missiles however they see fit, including on each other.

That may sound pretty scary. After all, what’s the stop an angry player from getting revenge by nuking you back to the stone ages? However, an interview with a Bethesda executive reveals that other players will be far more dangerous than the nukes.

The nuke mechanic serves a twofold purpose. It’s used to essentially level up the targeted area of a map, since whichever area you nuke will spawn powerful, irradiated enemies that drop upgraded loot. You can also use it to nuke another player’s base, but not reliably.

Pete Hines, VP of marketing at Bethesda Softworks, told Swedish gaming outlet FZ, that nukes can only be launched at specific areas of the map. Not at individual players.

“You can’t target an individual,” he said. “I can’t see you running around the map and go oh no I wanna nuke that guy.”

If a player happens to be in the blast radius of a nuke, they’ll be notified in advance so they can escape. The nukes in Fallout 76 primarily exist to create end-game encounters and they have little to no use as a PvP mechanic.

However, Hines said that hostile players will still be an integral part of the Fallout 76 experience. Fallout 76 won’t have any NPCs, which means anyone you talk, trade, quest, and fight with will be another human being.

Hines assured players that there will be mechanics in place to prevent griefing and abuse, but West Virginia is going to be a dangerous place. As for me, I’m definitely going to be the guy who will shoot you in the face unless you surrender all your Cram and Nuka-Cola.