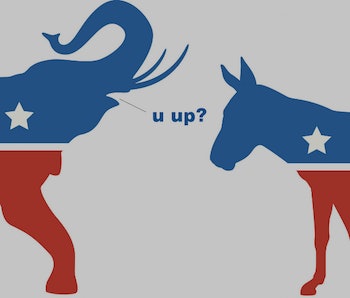 Are Republicans more likely to cheat than Democrats? It’s difficult to say for sure when most polls that look at people’s sexual behavior are self-reported. However, using data from the 2015 leak from Ashley Madison, a website that connects married people looking to have an affair, scientists have found which party affiliates were more likely to use the adultery dating service.

In 2015, a hacker collective known as the Impact Team hacked and published the data from Ashley Madison, an online dating service that connects married people seeking extramarital affairs. Data scientists Kodi Arfer, Ph.D., of University of California Los Angeles, and Jason Jones, Ph.D., an assistant professor at Stony Brook University, analyzed the leaked data alongside voter registration records to see how well a voter’s political views on sexual norms agree with their online behavior. Their findings were published in the journal Archives of Sexual Behavior on Friday.

At the time of the Ashley Madison leak, the website’s slogan was “Life is short. Have an affair,” establishing the sole intent of its mission. Using the leaked data, Arfer and Jones linked credit card payments made via the cheating site with voter registration records from California, Florida, Kansas, New York, and Oklahoma. The analysis took into account registered Republicans, Democrats, Libertarians, and Green party members, as well as those registered without a party affiliation.

“I expected that the results would come out with the parties in left-to-right order, with the leftmost party on one end and the rightmost on another, but I didn’t have a good guess which end would have the most Ashley Madison usage,” Arfer told Inverse. Between the 200,000 leaked Ashley Madison accounts and the 50 million voters registered in the five sample states, Arfer and Jones found 80,000 matches. Using this sample, as well as validated regression models controlling for state, gender, and age, the scientists could deduce that Democrats were the least likely to use the website, while Libertarians were the most likely.

“Our results are perhaps the strongest evidence yet that people with more sexually conservative values, although they claim to act accordingly, are more sexually deviant in practice than their more sexually liberal peers,” the study says.

After Libertarians, Republicans are the second most likely registered group to use Ashley Madison. In New York, the disparity between the registered conservative and left-leaning parties is striking. In one validated model that looks at the probability of Ashley Madison usage for a 40-year-old man registered to vote in New York, the likelihood of that man being a Libertarian is every 1 in 98. For a Democrat, it’s 1 in 223.

Conservatism may have been used as a personal guise in these scenarios, but Arfer finds it more likely that the users’ conservative, oft-religious communities created a taboo around sexuality that deterred sexual education and frank discussion on sexual health. “It would make sense if less sexually knowledgeable people were worse at sexual self-control.”

Looking at Arfer and Jones’ research, it’s clear that conservatives, who are more likely to espouse traditional marriages, might encounter more marital problems from their community’s lack of sexual discourse. This study does offer a solution, however: “Perhaps expanding sex education and weakening taboos against the mere discussion of sex are ways by which society could reduce the incidence of adultery.”