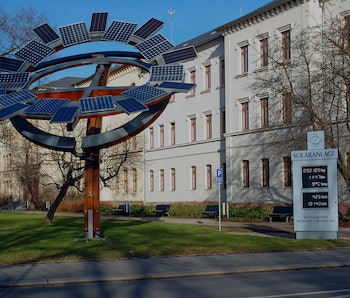 German solar and wind farms are producing more electricity than coal now: 118 billion kilowatt-hours through this past June, according to BDEW, the German Association of Energy and Water Industries. Clean energy is now the largest part of the EU leader’s total power mix (36.3 percent, over coal’s 35.1 percent) — but it’s frankly only one among the many drastic ways by which those models of Teutonic efficiency say they are hoping to meet their highly ambitious 2030 sustainable energy goals. Fingers crossed.

So how are they going to do it? A detailed plan produced by the German clean energy think tank Agora Energiewende — recently published in American English — lays out everything from targeted wind farm locations to temperature-controlled power grids to an electric rail overhaul. For its part, the German government has appointed a 28-person commission to produce a plan to phase out 50 percent of the country’s coal-fired power plants by 2030. There’s already questions about whether the goals are achievable: Germany’s Economy and Energy Ministry says that it will have to shutter at least that many to meet its stated 2030 carbon-reduction goals, according to Bloomberg. Their ultimate plan is to almost double their usage of renewable energies like wind and solar by 2030, bringing it up to 65 percent of their total energy portfolio.

German officials have told reporters that they are likely to recommend a system that retires coal plants on a staggered basis, with market incentives that encourage owners to meet the government’s targets. That said, BDEW warned about blackout risks in their press comments this Tuesday, and Germany’s electric grid regulator Jochen Homann told Reuters earlier this summer that the new 2030 renewable targets were going to require thousands of miles worth of additional power lines.

When Merkel’s 28-expert team releases its plan in December, it’s likely to look a little something like the recent proposal by the green policy wonks at Agora Energiewende. Their 84-page working paper suggests converting 80-percent of Germany’s train system to electric by 2030. They want to build a guidance system to monitor the temperatures of conductor cables on high voltage pylons across the power grid, to lessen the energy losses due to heat flux. They also suggested targeting specific parts of the country for wind turbines based on their unique local energy loads and their potential to overwhelm the national energy grid.

It seems like good, ambitious planning all around. The only trouble spot is Angela Merkel herself. The chancellor has a reputation for talking a big game on sustainable energy only to pivot in whatever direction best serves Germany’s industrial elites and her own political fortunes. When the EU was trying to create new fuel economy standards for cars in 2013, for example, Merkel took the side of German auto manufacturers and, purportedly, according to the Guardian,”threatened the then president of the European council, Irish taoiseach Enda Kenny, with the cancellation of Ireland’s bailout funds.”

Back at a climate conference in 2015, Merkel promised that “coal will remain a pillar of German energy supply for a prolonged time span,” in the same breath as calling decarbonization “a question of ecologic necessity.” So, coherence and follow-through would be a great additions to Germany’s ambitious 2030 clean energy plans. Someone should make sure that the 28-person commission remembers to put those in there.