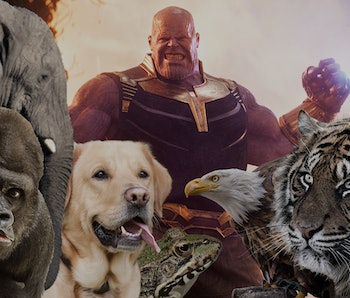 There’s a 50 percent chance that Thanos the Mad Titan killed your dog. The good news, however, is that there’s also a 50 percent chance that Thanos killed you at the end of Avengers: Infinity War, so it’s not like you would be around to mourn Fido. In any case, Marvel Studios president Kevin Feige recently confirmed just how vast the scope of Thanos’ genocide was, and your animal friends weren’t safe.

On Sunday, Birth.Movies.Death. published an interview with Feige that was mostly looking to the future of the MCU, with questions about Ant-Man and the Wasp, Captain Marvel, and Avengers 4. The final question, though, was about Thanos’ infamous snap that turned half of the MCU’s heroes to dust. Did it only apply to sentient beings, or was it all life? Here’s the exchange:

I do need to confirm something about the outcome of Infinity War, and apologies if you’ve addressed this – the end of Ant-Man and the Wasp led to conversations. Are half the animals dead? Are half of the horses gone? Half of the ants?

This is a bummer for animal lovers, but it does make Thanos’ plan to restore balance to the universe feel that much more horrible and complete. Rocket wasn’t spared because he was a raccoon, he was spared because he got lucky. Same with the drum-playing giant ant at the end of Ant-Man and the Wasp.

Of course, because we are doomed to overthink things, Feige’s confirmation raises a few more questions. When he says “all life,” does that extend to plant life? Groot died at the end of Infinity War, so it would appear that plant-like beings were vulnerable. Plants can grow too wildly and exhaust the resources they need to survive, which was Thanos’ whole fear, so why wouldn’t he have made the snap apply to plant life as well? None of the trees or grass in Wakanda appeared to turn to dust, though.

Also, what about bacteria? Did half of all bacteria die, even the ones that other types of life require to stay alive? Come to think of it, if half of all animals (and maybe plants) died, wouldn’t that cause a disastrous cascading effect up and down the food chain? There’s no way that Thanos’ “perfectly balanced” post-snap universe will last.

Good thing that the Avengers and co. will almost certainly set things back to normal in Avengers 4, meaning that these questions will be a moot point and your dog will be alive once again.