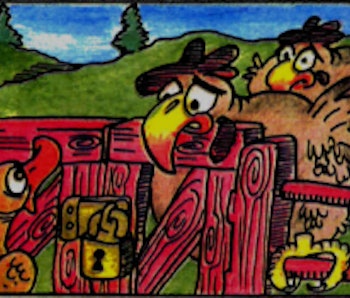 Through the ownership of The Washington Post, Jeff Bezos has been assumed to fall in the left-of-Libertarian quadrant of the political matrix, but a bizarre Neo-Nazi children’s book and other White Supremacist materials for sale on Amazon are now raising questions about Jeff Bezos’ unintended political legacy.

The book, and others like it, shine a light on the role that Amazon and other e-commerce sites play in distributing hateful materials and spreading racist ideology.

The Fable of the Ducks and the Hens

The book in question is called The Fable of the Ducks and the Hens, a poem that was originally written by the founder of the American Nazi Party, George Lincoln Rockwell, who also coined the phrase “white power.”

Published in 2014 by Historical Review Press with added illustrations (the original can still be found on The American Nazi Party website), it tells the tale of how a society completely composed of ducks was ruined after it brought in refugee hens. The message, regardless of author, is clear: Don’t take in people from other cultures or they will ruin yours.

The cartoon images, simultaneously cute and unhinged, make the book a disturbing vehicle for Nazi propaganda.

If the intention of the book wasn’t clear enough, a brief survey of other books published by Historical Review Press reveals multiple books denying The Holocaust, books on eugenics, and books on the Nazism.

One reviewer praises the book for educating kids about National Socialism, writing “Awesome work from a great man! This is great work for kids that are being brought up right!… it teaches our children to be careful and don’t let refugees in to your country. It shows the effects on a nation.”

At the time of this publishing, the book is still easily accessible, costing just $3 on Amazon’s Kindle.

When reached for comment, and Amazon spokesperson directed Inverse to the company’s content guidelines, saying, “Third party sellers who use our Marketplace service must follow our guidelines and those who don’t are subject to swift action including potential removal of their account.“

Amazon’s policy on hateful material is clear: “products that promote or glorify hatred, violence, racial, sexual or religious intolerance or promote organizations with such views” are not allowed.

Despite this, enforcement has been mixed at best.

According to a new report from the Action Center on Race and the Economy (ACRE), Amazon has repeatedly allowed toys, books, costumes, and other paraphernalia on its site that go against those guidelines. Researchers found multiple instances of Confederate flags being sold (they have been deleted since publication) despite the symbol being banned by Amazon.

Even more extreme are swastika pendants (still available), burning cross baby-onesies (taken down), and noose car decals (taken down) that were all found to be for sale on the site.

Perhaps more controversial are the books on Amazon that spread hate.

While historically significant Nazi books, such as Mein Kampf have been recently republished and made available everywhere, Amazon has allowed little known and self-published pieces of Nazi propaganda to be sold online.

Besides The Fable of the Ducks and the Hens, ACRE also found 50 titles available for Kindle from the White Nationalist publishing house Counter-Currents, which include titles like In Defense of Prejudice, which is still available at the time of this publishing.

Other white nationalist books were created and self-published through Amazon’s CreateSpace, such as the “bloodthirsty white nationalist fantasy” White Apocalypse, which is also is still available online, among other titles.

While Amazon’s problem appears to be particularly severe, they are one of many platforms struggling to find a balance between free expression and methods that tamper hate activity online. Just last week, chats leaked from Facebook Messenger showing White Nationalists organizing Unite the Right 2 on the platform. Now, Amazon faces a similar dilemma of how to maintain an open, literal marketplace of ideas, without perpetuating toxic ideologies.

More like this
Culture
8.3.2022 11:30 AM
10 years ago, the worst Philip K. Dick movie ever, pulled off something amazing
By Ryan Britt
Culture
4 hours ago
The Sandman: 11 characters pulled from DC comics history
By Robin Bea
Culture
8.7.2022 12:00 PM
Nichelle Nichols’ legacy was so much bigger than her Star Trek kiss
By Matthew Delmont and The Conversation
Related Tags
Share: