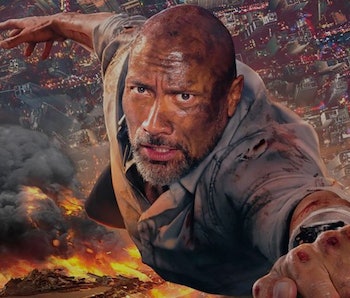 Dwayne “The Rock” Johnson might be best-known for defying the laws of physics with cartoonishly huge muscles and his unstoppably positive attitude, but according to some hardcore math, The Rock’s leap in the upcoming Skyscraper movie will probably end just like his jump in The Other Guys

On Thursday night, The Rock responded to a new article by MEL Magazine examining the physics behind the jump, which is prominently featured in marketing materials for Skyscraper movie.

In Skyscraper, The Rock plays a veteran amputee framed for starting a fire in a huge skyscraper that his family is trapped inside, all while a bunch of terrorists threaten to kill everyone. The Rock’s Will Ford has no choice but to leap from a crane towards an open window to re-enter the building, hoping to save his family. In the movie, he survives this jump, even if mathematical science makes it seem impossible.

The Rock said that they preferred using “a slightly drunk foreman on a construction site to calculate [his] iconic Skyscraper jump” rather than a legit “math professor.” Otherwise, this totally awesome shot would make almost no sense at all.

For further context, this seemingly impossible shot has proven so contentious among fans that it’s been memed countless times. There’s a Know Your Meme page dedicated to the discourse, and plenty of Twitter users and authors have examined just how impossible the jump looks.

MEL enlisted the help of Matthew Zaremsky to compute a parabola and come up with The Rock’s trajectory in the shot. Skipping over all the complicated math, The Rock has to run along the crane at 23 mph, “then jump slightly downward with a velocity of about 6.9 mph.” For comparison, Usain Bolt’s record-breaking top speed is 27.8 mph, which makes this jump humanly possible — just not for The Rock when he’s got a prosthetic leg.

However, we should also remember that this promotional shot, in addition to being total fiction, is also rendered without narrative context. What if the crane explodes while The Rock is running towards the end? Maybe, right as he’s reaching the end of the platform, the crane is already plunging forward with a great deal of acceleration. This could conceivably give The Rock enough forward momentum to reach his destination even if he’s running much slower than 23 mph.

The only way to know for sure how The Rock survives this one is by seeing Skyscraper when it is released in theaters on July 13, 2018.

More like this
Entertainment
6.23.2022 11:30 AM
15 years ago, Bruce Willis made his most preposterous action thriller ever
By Vance Osteen
Entertainment
6.21.2022 11:30 AM
5 years ago, Michael Bay made the most exhausting sci-fi blockbuster of the century
By Graeme McMillan
Science
4 hours ago
Astronomers discover a quirky star with a surprisingly galactic feature
By Nancy Atkinson and Universe Today
Related Tags
Share: