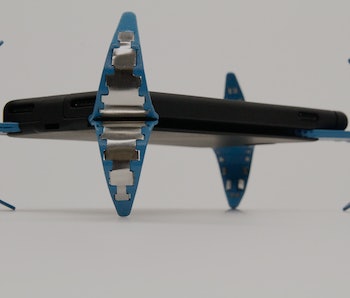 You might remember this iPhone case from the Facebook and Twitter videos that your roommate, uncle, and your long-lost high school friend reposted circa June 29. The Active Damping Case promises to save your phone from the destructive force of gravity with four, insect-like legs that jump into action whenever your device is in danger of smacking the pavement.

It’s the brainchild of Aalen University engineering student, Philip Frenzel, and economics graduate, Peter Mayer. Both German inventors spent two years perfecting the design in order to show the world a prototype demo of their insectoid phone protector. Now, after the dust has settled Mayer tells Inverse how the device actually works and what it will take to bring this so-called “mobile-airbag” to market.

How Does It Know When It’s Falling?

The most interesting thing about the device is the way it knows when the phone is actually in free fall and when it’s simply moving around by sensing acceleration.

“Our case can detect when your phone is in a state of free fall so it knows when to spring its legs into action to provide 360-degree protection,” he explains. “This acceleration sensor also works to ensure the case don’t pop open in your pocket or while you’re talking on the phone.”

These tiny devices, also known as accelerometers, can sense the standard acceleration of gravity (9.81 m/s^2) on an object. Whenever these devices begin to fall, this reading quickly shifts to zero because objects fall towards the Earth at the same rate. So whenever a measurement of zero comes up, the case springs into action.

Bringing the Mobile Airbag to Market

The concept’s already garnered some accolades, for example earning the top award from the German Society of Mechatronics. That said, it might be a while before anyone is actually able to get their hands on this insectoid case.

Currently, the duo is awaiting patent approval by the German Patent and Trade Mark Office. In the meantime, Mayer revealed that ADCase will announce the launch of its crowdfunding campaign in the next “five to six weeks, probably on Kickstarter,” which will only include an iPhone version of the case.

The goal from there will be to raise 500,000 euro ($587,609) in order to try to start shipping orders before Christmas. If and when the initial shipments are received, the plan is to sell the case for about 50 euro ($58.76). As it stands, there are no plans to expand to other smartphones but that’s primarily a means for ADCase to streamline production without breaking the bank.

“We need to put up some models for the crowdfunding campaign and the big advantage with Apple is that their phones all have similar dimensions,” explains Mayer. “This allows us to put up nine models with three distinct designs without costing too much to design and build.”

The team is planning on offering cases for the iPhone 6 and onward once the crowdfunding campaign is up and running. Mayer says the ADCase will have wireless charging capabilities and work as a battery pack, providing 20 to 30 percent charge when needed.

For now, keep a tight hold on your iPhones. There won’t be any robotic spider legs to break its fall until December at best.

More like this
Innovation
6.24.2022 5:00 AM
Beam-steering radio technology could help autonomous cars finally hit the road
By Sascha Brodsky
Innovation
7.2.2022 6:00 PM
Are self-driving cars safe? The tipping point rests on a psychological illusion
By Jean-François Bonnefon and The Reader
Innovation
7.1.2022 10:00 AM
Robots are ready to get touchy-feely
By Sarah Wells
Share: