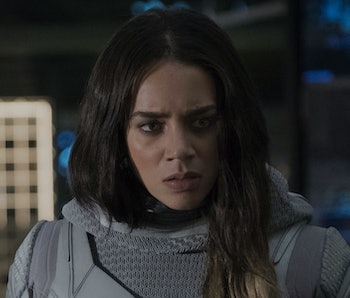 The Quantum Realm pseudoscience featured in Marvel’s Ant-Man and the Wasp will probably influence the upcoming Avengers 4 in some fashion — whether through time travel or alternate dimensions — but there’s yet another hugely important bit of science from the Ant-Man sequel that could have greater implications on the future of the Marvel Cinematic Universe.

Huge spoilers follow for the end of Ant-Man and the Wasp.

“When it comes to this Quantum Healing Research, it’s safe to assume that it might have a wider application,” Ant-Man and the Wasp director Peyton Reed tells Inverse, “But it’s mostly focused on Ghost’s situation, for now.”

Reeds referring to Ava Starr, aka Ghost, the primary antagonist in Ant-Man and the Wasp. She’s a superpowered assassin who can phase through solid matter as a result of a childhood accident involving radiation from the Quantum Realm that caused her individual cells to constantly separate and reunite. She repeatedly phases in and out of reality, a condition that causes her constant, excruciating pain.

Ava wants to steal Hank Pym’s research so she can find a way to cure her condition, and she’s gotten aid for years from Hank’s former colleague Bill Foster. Ava isn’t necessarily evil — she’s just desperate, and she’ll do evil things in order to save herself, having been driven a bit mad by an existence of pain. But is she redeemable? Or has she been corrupted by her misery?

“We liked a certain amount of ambiguity in terms of Ghost and Bill Foster’s story,” Reed explained. “I like the idea that Ghost can kind of go either way. She’s allegedly been killing, but there’s a lot of damage that’s been done to her.”

Ghost spends the movie fighting the Wasp and Ant-Man, but after Team Ant-Man successfully rescues Janet Van Dyne from the Quantum Realm, the former Wasp is able to essentially “heal” Ava’s condition by using Quantum Healing Energy that’d been built up in her body over decades of exposure.

With all that pain and misery diminished for Ava, it opens up new opportunities for her as a character. In the film’s post-credits scene, Team Ant-Man even refers to Ghost as “our new friend,” which could indicate that she’s one of the good guys now.

“She’s allegedly been cured, but there’s a lot of damage that’s been done,” Reed explained, hinting that her future might not be simple. The director wouldn’t confirm whether or not Ava retained her powers, but the post-credits scene does confirm that she needs more Quantum Healing Energy.

Scott Lang goes back into the Quantum Realm to extract some more Quantum Healing Energy for her in the post-credits scene, but then Thanos snaps his fingers, turning Hank Pym, Janet Van Dyne, and Hope Van Dyne to ash, effectively trapping Scott in the Quantum Realm. If Ava doesn’t get that healing energy, will her situation continue to degrade further and further? Does it matter when she was probably killed by Thanos anyway?

If Quantum Healing Energy can help Janet survive for three decades without decent food or water and seemingly heal Ghost’s condition, then it’s safe to assume that this new area of scientific potential could help reshape the future of this universe. Minor antagonist Sonny Burch does say early in the movie “quantum energy is the future.”

So when audiences reconnect with Ant-Man and the rest of the surviving heroes in Avengers 4, we could potentially see a wider application for Quantum Healing Energy that’ll reshape this world for good. In a realm that transcends time and space, who knows what’s possible? Maybe even Captain Marvel’s powers come from the Quantum Realm?