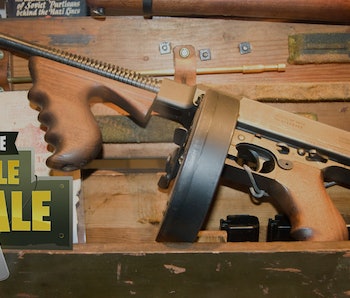 After leaking last week, Fortnite’s new Drum Gun is finally official. Developer Epic Games confirmed that the new Tommy Gun-inspired weapon is coming through the in-game news feed that pops up each time you log into Fortnite.

The announcement doesn’t offer much info, but at least it confirms the rumors. The message reads: “Drum Gun - Coming Soon! New weapon with a high capacity drum magazine and a quick rate of fire.”

There’s no official release date for the Fortnite Drum Gun yet, but it will probably arrive with the game’s weekly update, which usually hits on Tuesday morning. In the meantime, here’s everything else we know about the new Tommy Gun weapon.

According to Fortnite Twitter leaker @TwoEpicBuddies, the new weapon will come in both green and blue rarity levels. It’s also classified as an assault rifle.

For even more info we turn to Fortnite-focused website Storm Shield One, which tracks the game’s leaderboard, updates, and any other useful info. The site claims to have specific details on the new weapon in its two varieties. Here’s the full breakdown, including how much damage it will do, fire rate, reload time, and more:

The Drum Gun (also known as the Tommy Gun) fits in nicely with Fortnite’s new detective noir theme, which was revealed in the latest batch of leaked skins. This official announcement seems to confirm that new direction, though whether it’s just a visual flourish or an actual new plot point in the game’s very loose narrative remains to be seen.

Unlike some of the game’s weirder weapons, the Tommy Gun (short for Thompson submachine gun) also comes with its own historical associations. The quick-firing weapon was used by the U.S. during World War II, and over 1.5 million copies were produced during the war. Before that, the gun achieved notoriety as the weapon of choice for gangsters during the 1920s and ‘30s.

So, yes, Fortnite’s new weapon may make you feel like a gangster, but don’t expect to do any better in Tilted Towers just because your packing a 1920s era machine gun.

More like this
Gaming
6.21.2022 7:36 PM
How to complete Nindo Challenges and earn the Manda Glider in Fortnite
By Joseph Yaden
Gaming
6.16.2022 6:11 PM
Everything you need to know about Digimon Survive
By Hayes Madsen
Gaming
6.30.2022 3:00 PM
Skull & Bones release window, gameplay, trailer, and platform details
By Joseph Yaden
Related Tags
Share: